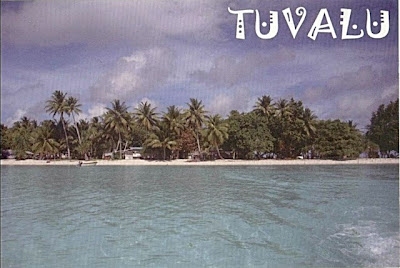 This special postcard was received from Tuvalu and belongs to "Send Tuvalu to the world" project for Earth Day 2010.

Tuvalu is a Polynesian island nation located in the Pacific Ocean, midway between Hawaii and Australia, formerly known as the Ellice Islands.

I'm lucky because they live less than 10,500 people in Tuvalu. So it's quite difficult to get a postcard from there!

And it could be more difficult in the future. Due to global warming and the rising of sea-level, there are predictions that in the next 50 years the entire population will have to be evacuated. The ocean can swallow Tuvalu whole, making it the first country to be wiped off the map by climate change.