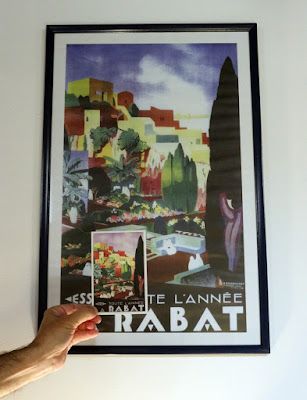 You arrive in a city and buy a postcard for a friend. And later, at the hotel, you discover that the decoration of your room matches perfectly!
12 comments:

London off the Beaten Track 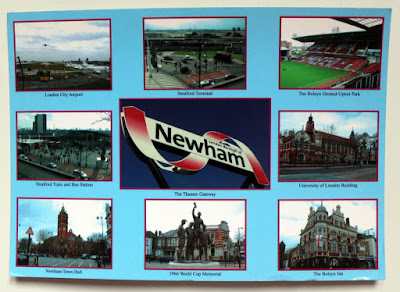 On the back, it reads:

London Borough of Newham. Stratford Station an important junction (originally built in 1839) with a modern bus station and shopping centre. Home of West Ham United football club (The Irons/Hammers) who originated from the ThamesIron works in 1895,Newham is preparing to welcome people and athletes of the World for the year 2012.

So this postcard waited at least five years on the shop for my friend to buy it and send it to me... 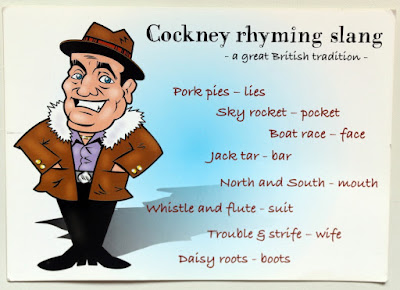 I am afraid that the Cockney Rhyming Slang is too difficult... 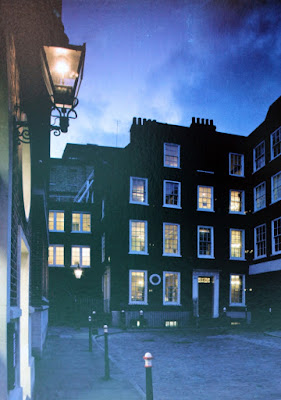 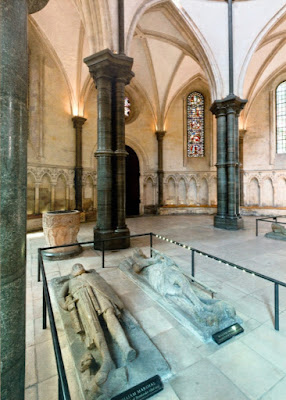 The Temple Church (Fleet Street). It came to the publics' attention a number of years ago at the publishing (and subsequent film) of Dan Brown's novel The Da Vinci Code

All postcards sent by Laura (the UK). And also this letter: 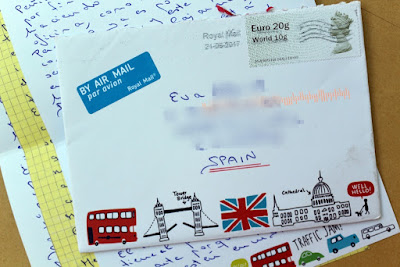 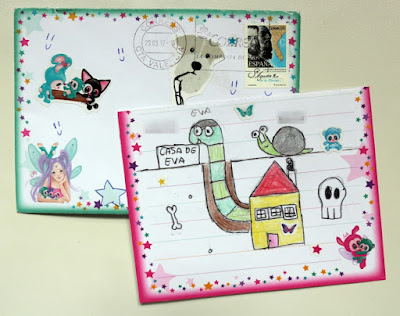 I made a fire; being tired
Of the white fists of old
Letters and their death rattle
When I came too close to the wastebasket
What did they know that I didn't?
Grain by grain, they unrolled
Sands where a dream of clear water
Grinned like a getaway car.
I am not subtle
Love, love, and well, I was tired
Of cardboard cartons the color of cement or a dog pack
Holding in it's hate
Dully, under a pack of men in red jackets,
And the eyes and times of the postmarks.

This fire may lick and fawn, but it is merciless:
A glass case
My fingers would enter although
They melt and sag, they are told
Do not touch.
And here is an end to the writing,
The spry hooks that bend and cringe and the smiles, the smiles
And at least it will be a good place now, the attic.
At least I won't be strung just under the surface,
Dumb fish
With one tin eye,
Watching for glints,
Riding my Arctic
Between this wish and that wish.

So, I poke at the carbon birds in my housedress.
They are more beautiful than my bodiless owl,
They console me—
Rising and flying, but blinded.
They would flutter off, black and glittering, they would be coal angels
Only they have nothing to say but anybody.
I have seen to that.
With the butt of a rake
I flake up papers that breathe like people,
I fan them out
Between the yellow lettuces and the German cabbage
Involved in it's weird blue dreams
Involved in a foetus.
And a name with black edges

Wilts at my foot,
Sinuous orchis
In a nest of root-hairs and boredom—
Pale eyes, patent-leather gutturals!
Warm rain greases my hair, extinguishes nothing.
My veins glow like trees.
The dogs are tearing a fox. This is what it is like
A read burst and a cry
That splits from it's ripped bag and does not stop
With that dead eye
And the stuffed expression, but goes on
Dyeing the air,
Telling the particles of the clouds, the leaves, the water
What immortality is. That it is immortal. 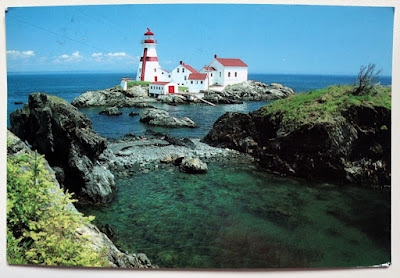 Head Harbour Lighthouse in New Brunswick (Canada). Postcard sent by John (the UK). It has been previously sent to someone from Canada, as you can see. 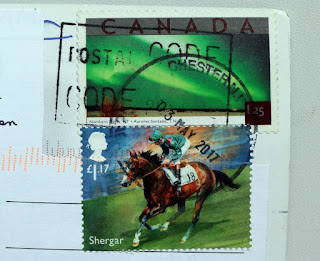 The sender hoped I don't mind that it is a "second-hand" postcard. On the contrary, I think it makes it even more interesting!

It is somehow a pleasure to look at postcards from cold places in the middle of the summer, isn't it? The following were sent by Bryon from Anchorage (Alaska, the USA), back in April:

What or Whom Is She Staring At? (Stamp) 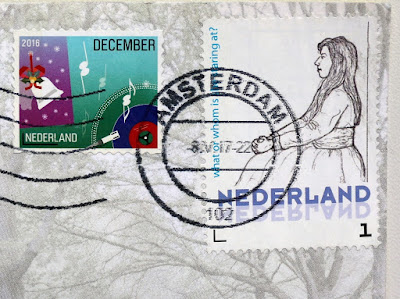 What or whom is she staring at? is a mail art project by Heleen (the Netherlands). This was my contribution. I am glad to received again this woman in the form of a stamp!
5 comments:

Envelope sent to John (UK). This year I did not wait until the year finishes to reuse some pages of the calendar!

I thought that the Queen of Hearts was a good choice for Koningsdag... But I am afraid that this letter never reached Heleen's mailbox :(


Happily, these postcard sent by Bryon (the USA), did arrive safe and sound!


And also did this (big!) postcard sent by John (the UK), about the lest known adventures of Alice. (He had previously sent its twin.) 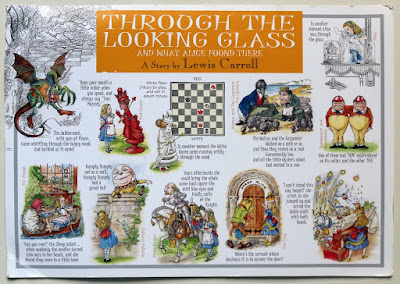 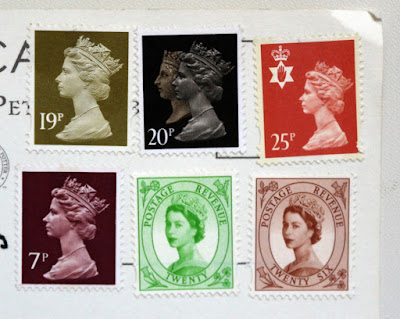 Have You Ever Regretted Having Sent a Letter?

These postcards were received before the summer... but I thought they are very summery! (This is a scheduled post, and I hope I will be swimming in the sea while you read this...) 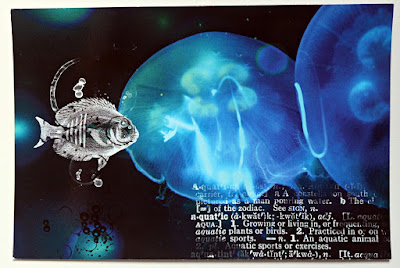 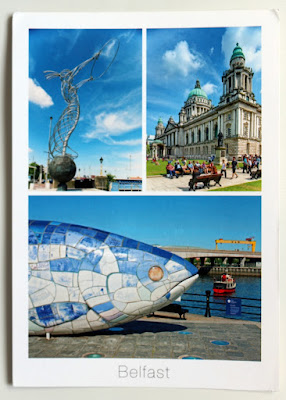 Sent by Laura (the UK),with several views of Belfast City: the The Thanksgiving Sculpture (also referred as The Beacon of Hope), the City Hall Belfast, and The Big Fish with one of the famous Harland and Wolff shipyard cranes in the background, The outer skin of the fish is a cladding of ceramic tiles decorated with texts and images relating to the history of Belfast. 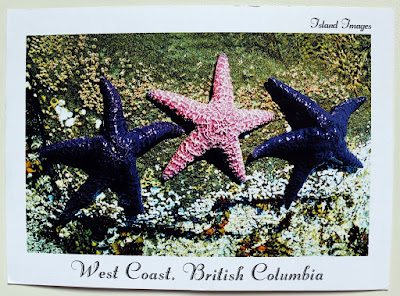 Postcard sent by Bryon (Canada). These starfish are spectacular in their pinks and mauves! 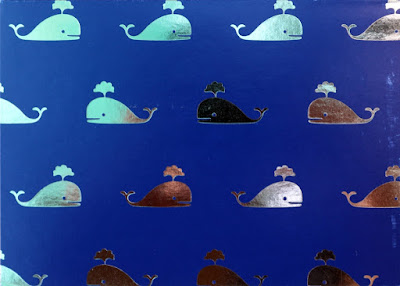 Folded card sent by Phillip. I know, I know... whales are not fishes!
6 comments:

For snail mail lovers, one good thing about travelling to Rome is that you can just cross St. Peter's Square and be in a different country: the Vatican, the smallest state in the world. Its Philatelic and Numismatic Office issues its own stamps. Another good thing is that you can take pictures of all  the post offices (and maybe all the mail boxes) in one day. Actually, in less than one hour.

This is a tiny post office in St. Peter's Square. I saw it after working time. It seemed too small to have so many mail boxes outside... 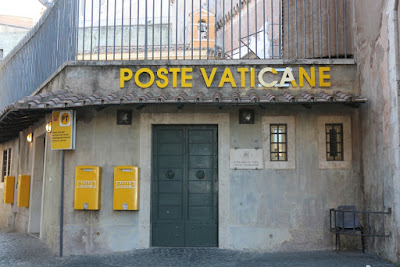 Maybe that is the reason why they have another (temporary? mobile?) post office in the square: 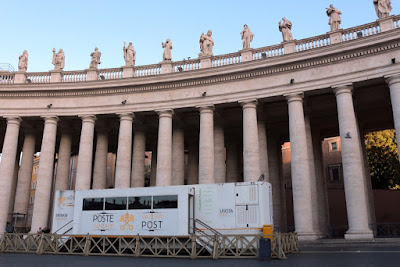 I just like the colour of that yellow-orange mail boxes (and phones!): 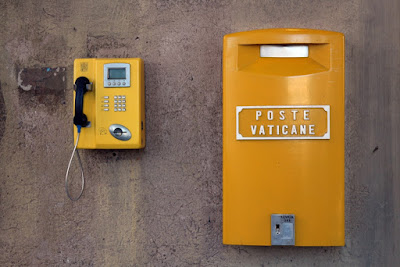 They are scattered throughout the square... It seems that a lot of people is sending mail from there! 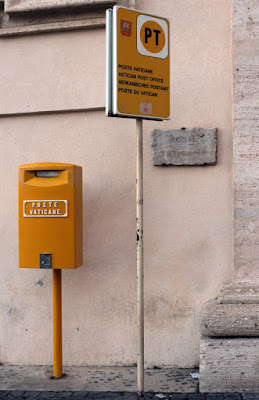 But, actually, I didn't use any of those. I bought my stamps and post the cards in the other office, inside the museums. Photographs to the counter weren't allowed. So I just took pictures of that mail box that looked like a wardrobe, didn't it? 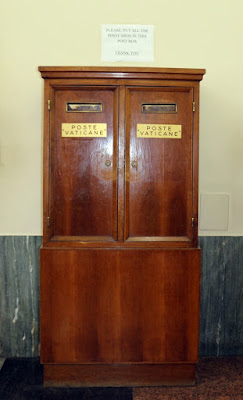 I am sorry that I couldn't send more postcards from there. 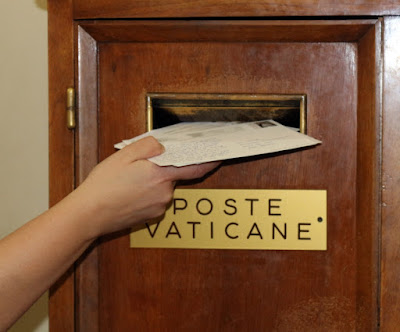 Because they are something special. And they arrived quickly and with perfect cancellations!


The blue one is an historic mail boxes that I spotted inside the Philatelic and Numismatic Museum. I thought it was no longer working. Then, I read on the website: "The historic post boxes dispersed in various key points throughout the Museums are still in perfect working order". 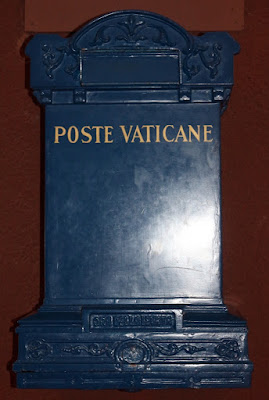 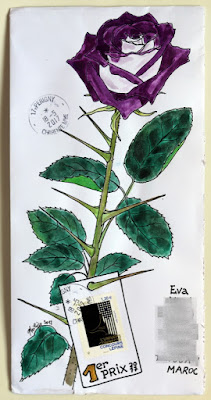 Letter sent by Philippe (France). I guess that the picture doesn't give the idea of the beauty of this hand-painted envelope.

The stamp, issued on 27 April 2017, is about the Concours Lépine, This is a French competition for inventors created in 1901 by Louis Lépine. It was originally intended to encourage small toy and hardware manufacturers, but over the years it has grown into an annual event that includes a multitude of innovative ideas.

L'épine means 'the thorn'... And, as you can see on the envelope, this original rose won the first prize. Another clever pun! 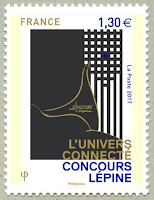 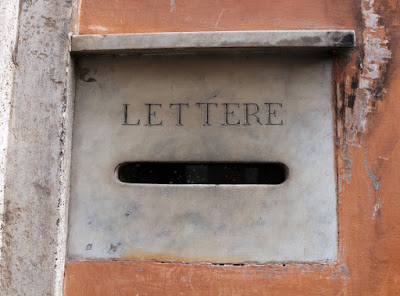 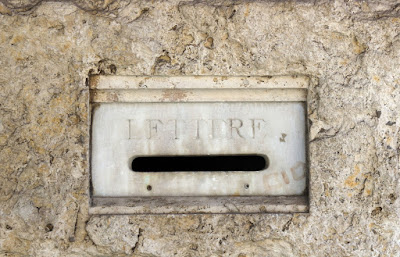 Archived in MAIL ADVENTURES, mail boxes, places I've been to 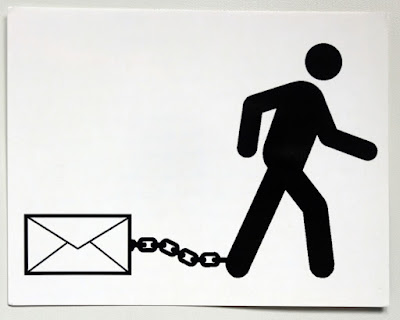 I received this postcard from its creator Heleen, three years ago or so. I am glad that Phillip (the USA) sent it again, because it is a good reminder. But, as I wrote in that occasion, I am afraid that I am a hopeless case in this matter.
1 comment:

If you are looking for movies with a prominent letter writing, postcard or postal service theme... This on the blog of Max &Co Post is probably one of the best!
No comments: