If you could be anywhere else right now ... Where? Say it with a stamp. Only one!
I would choose a non-crowded Greek museum, for instance. 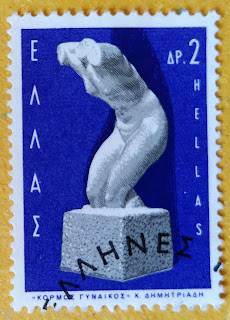 Sunday Stamps | Between Land and Sea

Today's theme in Sunday Stamps is Land and Sea. That makes me think of... lighthouses, of course!

I'm showing today some lighthouses sheets that I have got by snail mail, but inside envelopes. So, they remain mint. 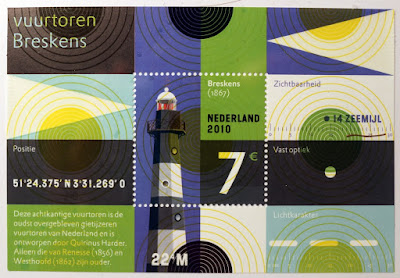 Nieuwe Sluis is a lighthouse located near Breskens, a harbour town in the province of Zeeland, in the south-western Netherlands. It is the oldest remaining cast-iron lighthouse in the Netherlands. It was built in 1867 and became a monument in 1982. Since 2010 it no longer serves a nautical purpose and in October 2011 the light went out permanently.

The minisheet was issued on 27 April 2010. Have you noticed the high face value? 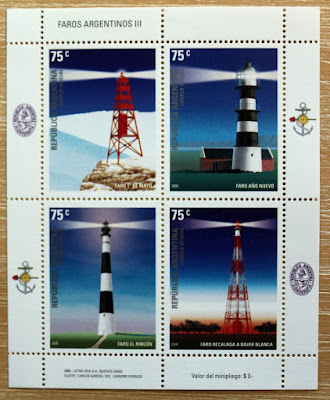 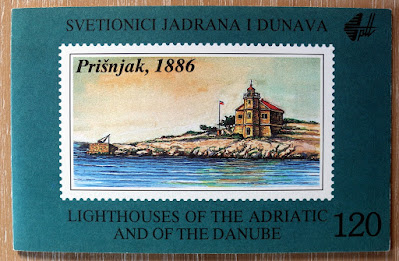 And a stamp booklet entitle Lighthouses of the Adriatic and of the Danube, issued by a country not longer existing: Yugoslavia. Most of these lighthouses are in Croatia nowadays. 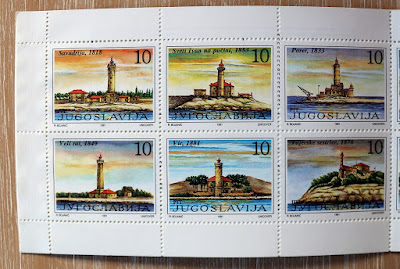 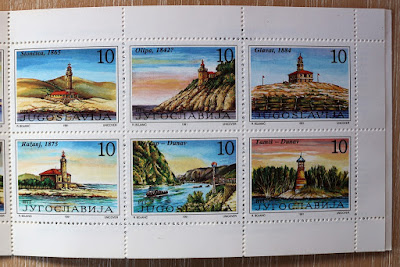 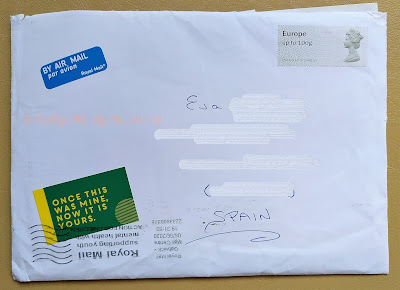 A Giant at New Brighton

I had got some postcards featuring the New Brighton lighthouse in England, like this one or this one. I have even been there. But I saw no giant!
Postcard sent by John (the UK)
4 comments: 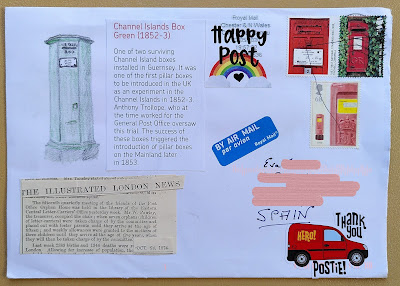 So many postal details on this letter from John (the UK)! (Forget the pen cancellation). 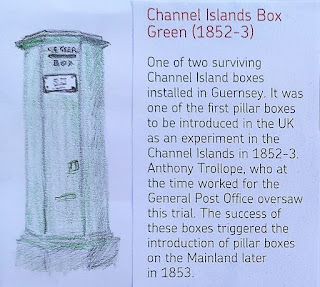 Channel Islands Box Green (1852-3)
One of two surviving Channel Islands boxes installed in Guernsey. It was one of the first pillar boxes to be introduced in the UK as an experiment in the Channel Islands in 1852-3. Anthony Trollope, who at the time worked for the General Post Office oversaw this trial. The success of these boxes triggered the introduction of pillar boxes on the Mainland later in 1853. 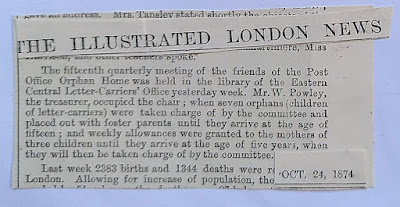 The illustration of this postcard is reproduced from a stamp designed by Terence Millington and issued by Royal Mail on 12 August 1997. Actually, I had got that stamp: 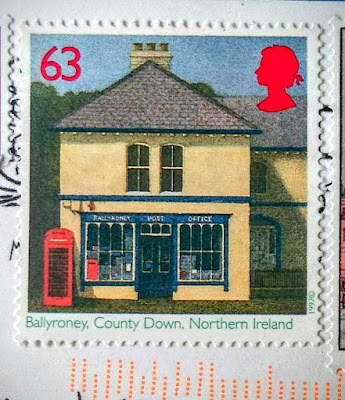 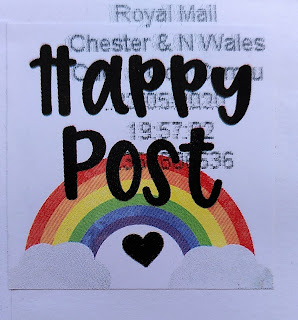 So, thanks to the sender and... 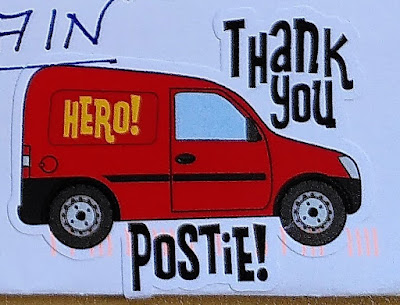 A postmark for The New Normal...
...And a couple of Edward Hopper on paintings which reflects also the New Normal, with all those "Stay-at-Home" activities and times.

Same day last week, I got two postcards featuring bikes, from the USA and the Netherlands. Plus a letter from the UK about a kid learning how to ride a bike.
The Zeus postcard was written on 22 April, postmarked on 23 April, and arrived two months later: on 22 June. Do you think it came by bike?

-----
*This is the title of a famous play by Fernando Fernán Gómez. Las bicicletas son para el verano means 'Bicycles Are for the Summer'
5 comments: 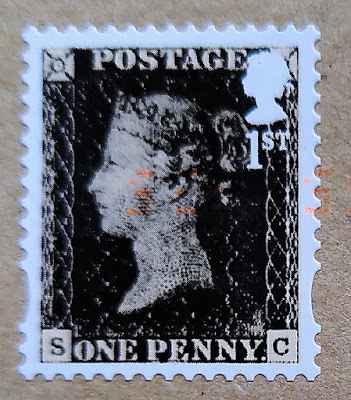 Sunday Stamps is today about Anniversaries.
2020 marks the 180th anniversary of the Penny Black. The stamp knows as Penny Black was the world's first adhesive postage stamp used in a public stamp system. It was issued in May 1840, and features a profile of Queen Victoria. 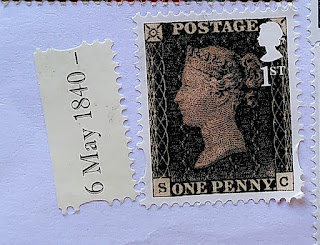 Reproductions of the Penny Black, Twopenny Blue and Penny Red were meant to be part of the big London 2020 stamps shows. The fair was cancelled, but the stamps were issued anyway. 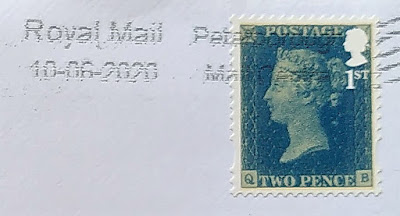 This is the whole sheet:
9 comments: 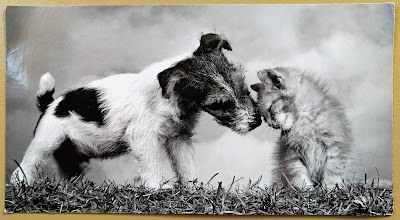 Playing around with Circus Lettering 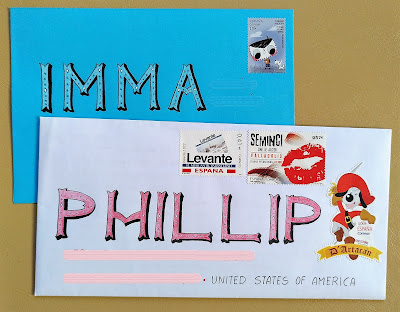 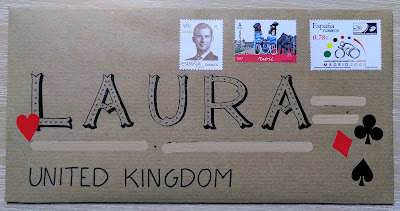 
It is a pleasure to see where the trip of your letters started, isn't it?

And a second one from John: 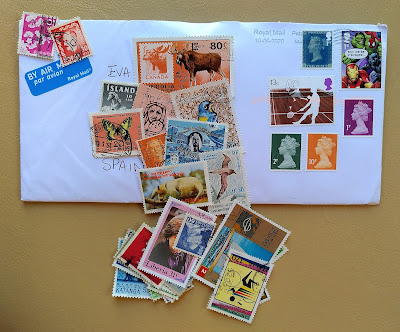 Joan Beauchamp Procter  (1897-1931) was a zoologist. This postcard designed by Rachel Ignotofsky highlights her top achievements: "Discovered a new species, the peninsula dragon lizard" ; "Considered an expert in herpetology"; "Designed the most advanced reptile house of its time".
It was sent by Phillip (the USA). It arrived on a big mail day, i.e. along with no less than eight pieces of mail. Among them, another postcard featuring a reptile. I love these little coincidences in the mail box.
Sent by Heleen (the Netherlands).
4 comments:

Open with a Smile 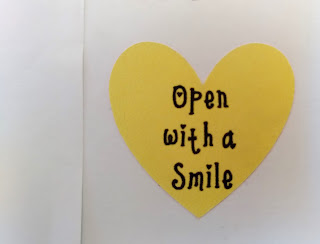 Sticker on the back of an envelope from the UK :)
2 comments:

Dad's Army is a BBC television situation comedy about the antics of a British Home Guard unit during the Second World War in the fictional seaside town of Walmington-on-Sea. It was written by Jimmy Perry and David Croft and broadcast on the BBC from 1968 to 1977.

Royal Mail marked the 50th anniversary of this enduring and hugely popular sitcom with a set of eight Special Stamps. 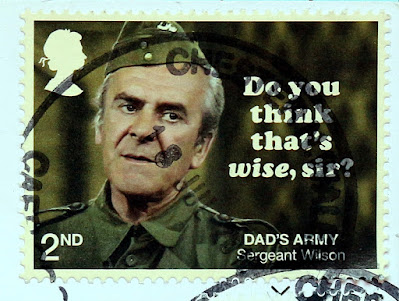 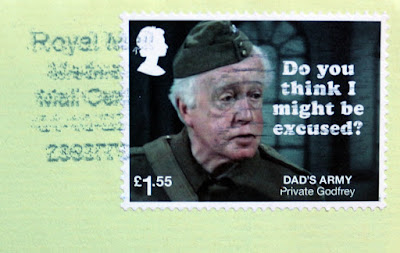 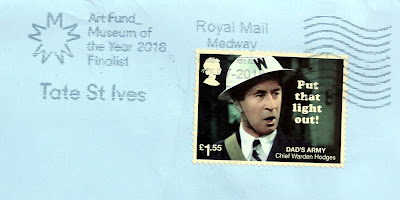 This is a Sunday Stamps post. You can go there to see other Father Figures on stamps.
13 comments: