Women on Stamps | S for Scouts 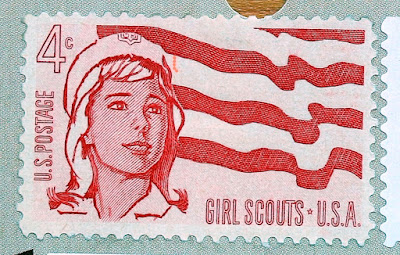 Scouting or the Scout Movement is a worldwide educational movement that works for the integral development of the young people, that they may play constructive roles in society, with a strong focus on the outdoors and survival skills. It was founded in 1907 in England, and spread later to a large number of countries.

The stamp above was issued in 1962 to honour the 50th anniversary of the Girl Scouts of America. And, the following one, in 1987: 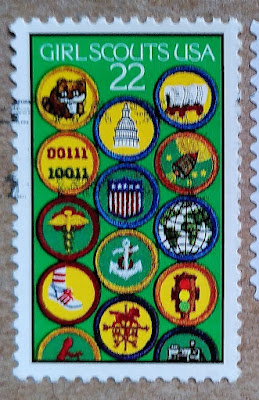 Scouting seems to be a very popular subject for stamps. In 2007, because of the 100th anniversary of scouting, this was the theme of the EUROPA stamps. If you feel curious, you can see here the great variety of stamps issued.
I have received more stamps, featuring girls and boys:

For the current round of Sunday Stamps A-Z I am showing stamps dedicated to women. You can see here all the Women on Stamps featured on this blog. 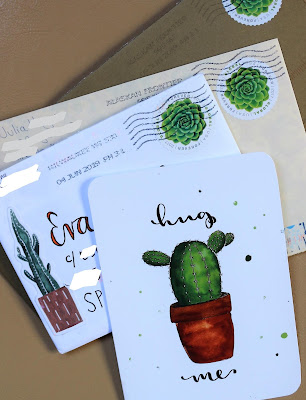 For I love them! 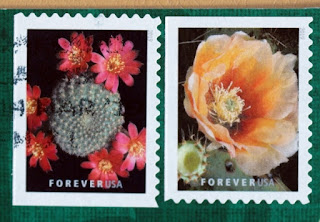 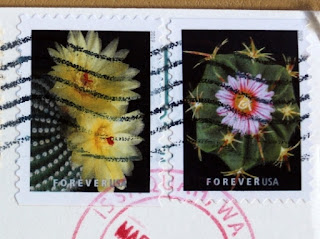 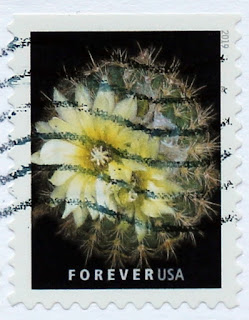 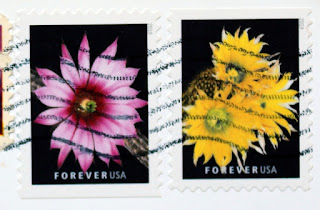 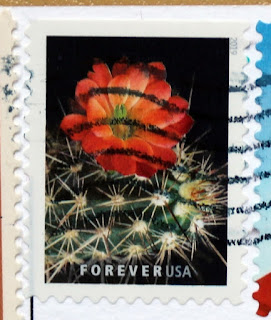 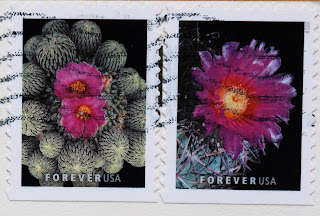 More postcards from St. Augustine (Florida), also sent by Bryon, allowed me to discover a part of Spanish history I am not very familiar with.


Spanish moss, also called Florida moss, long moss or gray beard, is not true moss. It is a flowering plant that grows upon larger trees, commonly the Southern Live Oak or Bald Cypress in the southeastern United States.

This is one of the strangest (and funniest!) souvenirs that I have received from someone visiting a city. When I received the first, I think I was not fully aware that I was going to get two more...

On the back of the postcards there is some information about the place:

This city is the oldest continually occupied European settlement in North America. St. Augustine was founded in by 1508 by Don Pedro Menéndez of Avilés, Spain, who was sent to protect the Spanish Treasure fleets sailing along the coast of Florida.

A stone fortress was buit by the Spanish to protect St. Augustine form English expansion. Construction of the Castillo de San Marcos started in 1672 making it the oldest masonry fortification in the United States. It stands today as a symbol of Spain's early colonization of our country.


Finally... we know why an alligator is appearing on the postcards!


To learn more about this "tale" and others, visit the St. Augustine Alligator Farm and Zoological Park. You can see 23 species of crocodilians, rare white alligators, exotic birds, and mammals.


Fortunately, it was not the last postcard that Bryon sent to me. Would you send something like this to your friends? It made me laugh, so I would, definitely!

Not easy to take a picture of the three postcards together! 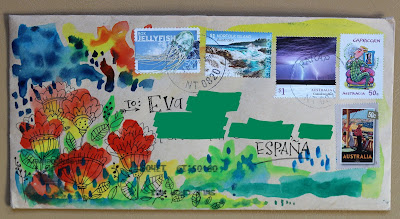 This was a nice and sad letter to get one month ago. The envelope was illustrated by Marita Albers. It contained the last of Nat Quintos Uhing's beautiful letters (a printed reproduction of a painted and handwritten letter), written just before she passed away. I had not the good fortune to meet her in person. 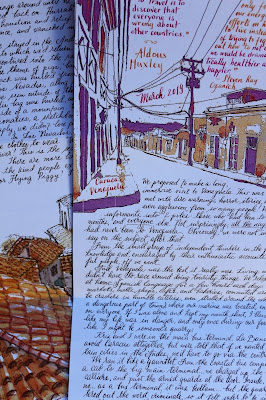 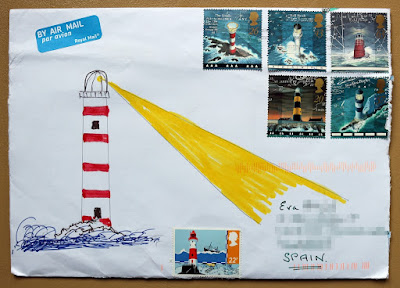 A fab envelope made by John (twin of this previous one). Inside, among other interesting stuff, some vintage postcards of lighthouses.

These arrived inside a diferent envelope, also sent by John. They are, at least, one hundred years old. And finally they have found the recipient! 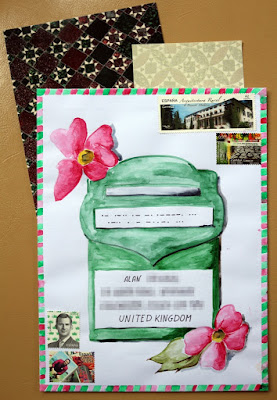 Watercolour envelope sent to Alan (the UK). And yes: there is a message in Morse code on the green post box!
6 comments:

Women on Stamps | R for Rand 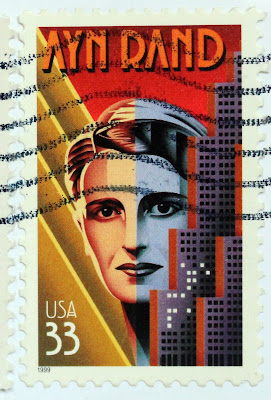 Ayn Rand (1905 – 1982) was a Russian-American writer and philosopher.She is known for her two best-selling novels, The Fountainhead and Atlas Shrugged, and for developing a philosophical system she named Objectivism.

This stamp appeared in 1999, and was illustrated by artist Nick Gaetano.


----------
For the current round of Sunday Stamps A-Z I am showing stamps dedicated to women. You can see here all the Women on Stamps featured on this blog.

Not only I have been sending Rome-related postcards. I have also got some beautiful ones!

The calendar and these postcards say that the summer is here!

Sent by Laura (the UK) and Terhi (Finland)
6 comments:

To 'My' Mail Monster 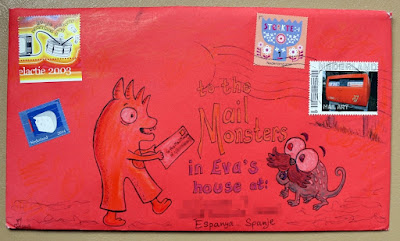 Usually, I am the only one at home who receive all sort of creative mail. Thus, I was really amazed when I find a letter addressed "To the Mail Monster in Eva's House at...".

I thought I have discovered that a Mail Monster was living at Heleen's place... And the fact is that I have another one (with a big moustache!) living at home. 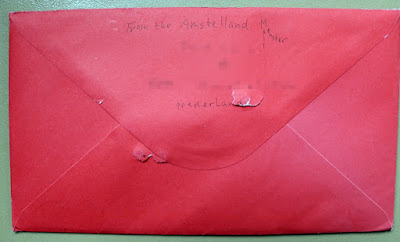 As you can see, there is no doubt that the letter was posted by a Mail Monster... 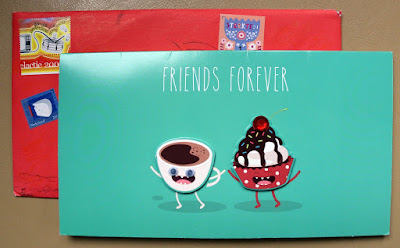 I'm happy it seems a friendly one. At least, with other mail monsters, according with the letter it wrote (with its monstrous handwriting)... 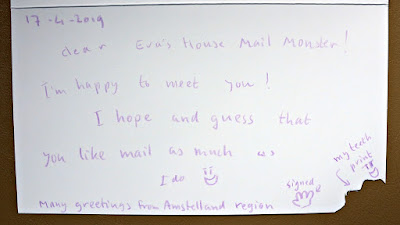 I'm happy to meet you! I hope and guess that you like mail as much as I do :D

Many greetings from Amstelland region


Now I'm afraid that, if my mail monster finds the letter, it will steal my stamps to reply...
8 comments: 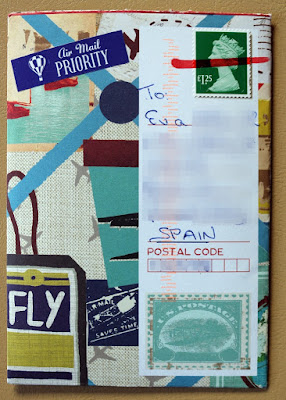 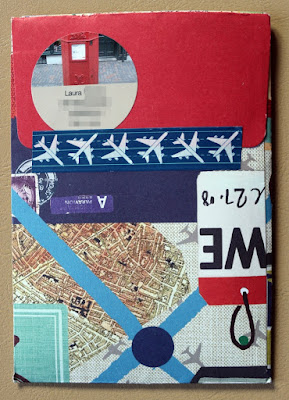 From Laura (the UK), front and back. Nice envelope but ugly cancellation! 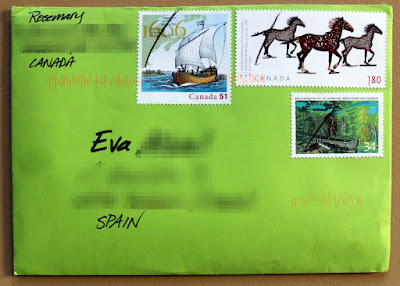 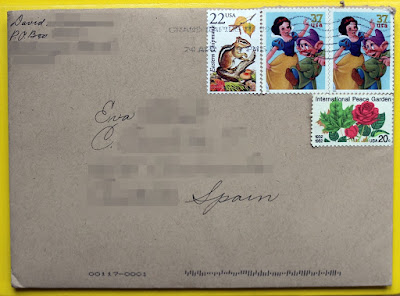 From Dave (the USA). Happily, with a decent cancellation on the carefully chosen stamps!
3 comments: