With the second one it happened something funny: the sender used it as a base for a handmade Christmas card. The collage arrived in perfect condition. But, for some reason, detached from the ad postcard.. So I have happened to see the postcard, and it turned to be a favourite beer. So, unintentionally, she sent two surprises instead of one!


I added this post to Maria's Linky Party Postcards for the Weekend, the theme being Serenity.
5 comments: 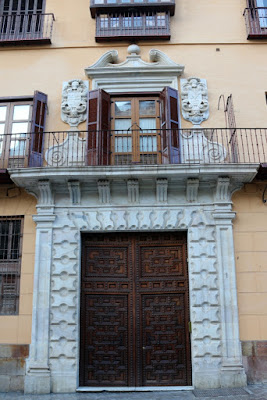 The Zea Salvatierra Palace is one of the most important 17th and 18th century landmarks of Málaga. Different historical events led to the palace becoming the Town Hall during the reign of Isabella II (1830 – 1904), coming under attack during the 1868 revolution. But it is mostly unknown that, after this, it was used to house the Main Post Office (Casa de Correos) and it continued as such well into the 20th century. Today it is a private residence. 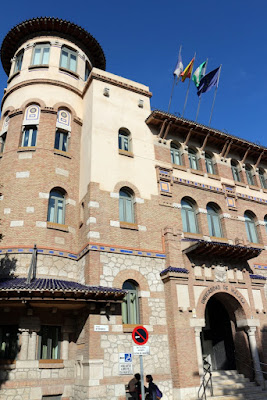 This building is currently the Rectorate of the University of Malaga (Spain), but it was build in 1916-1926 as a main post office. Can you spot the envelope? 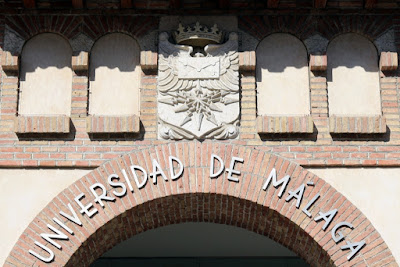 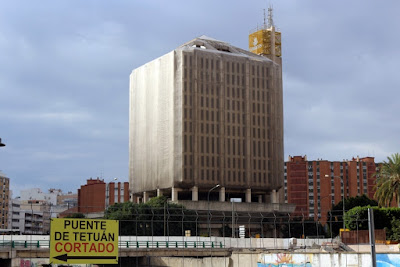 This ugly concrete building seems to have been another post building during the last century. Now it is closed (under reparations?) 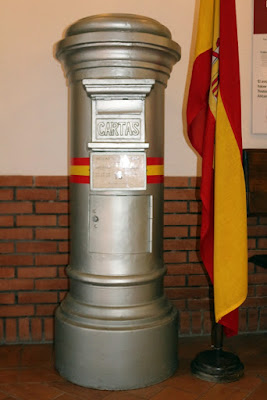 And this silver postbox belongs also to the postal history of Malaga. I took the picture in the Museo Aeronáutico de Málaga, where I learned that the first air mail line that connected Europe and Africa had a stop in Malaga, in order to refuel. Actually, between Toulouse and Casablanca, the planes had to refuel four times: Barcelona, Alacant, Malaga and Rabat. So Malaga was one the first Spanish cities that enjoyed the high speed of the airmail, and it had to be posted in this special boxes.
4 comments: 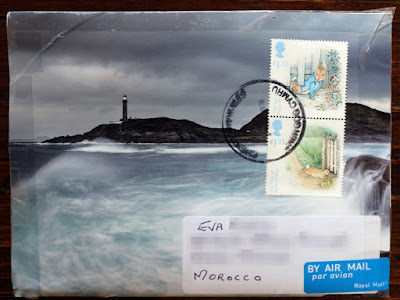 On this wonderful envelope sent by John (the UK), made of a page of a magazine (I guess), you can see the Ardnamurchan lighthouse, in Scotland.

And inside, among other things, I found some vintage postcards depicting more lighthouses:


And let me add a very interesting postcard sent by Phillip (only that at first I thanked another person for it...!). It is only my second piece of mail from Puerto Rico, I had never seen a postcard like this: every picture is a sticker; so you can use it, for instance, for you travel notebook. As it says on the back: perfect for scrapbooking! 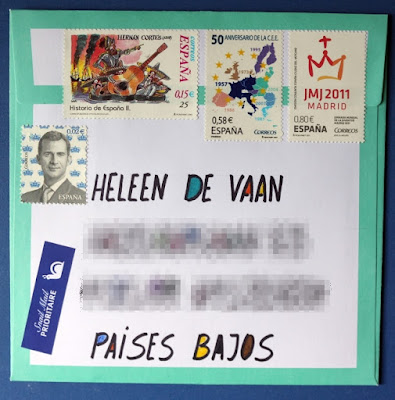 Letter sent to Heleen (the Netherlands),with a happy cow on the back, Dick Bruna's style. 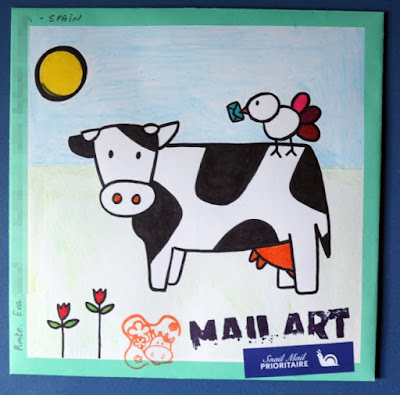 Today's theme in Maria's Postcards for the Weekend is Gratitude.

One think I always feel grateful for is... post. Every piece of mail brings with it the time and the effort of the sender. And also the effort of postal workers!

But, of course, gratitude is useless if you do not show it. And the way is... replying to the letters!

These Envelopes are a Pleasure to Look At!

Send Someone a Love Letter

But do not stick a picture of Antactic ice as a stamp, please! 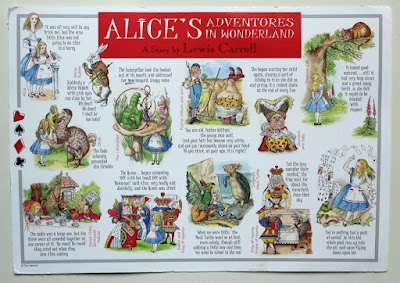 There is no way to take a proper picture of this big postcard sent by John (the UK). You can believe me that it is wonderful, or see here the details.

Love in the 19th Century 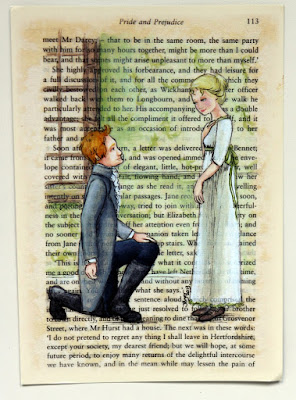 Postcard sent by Laura (the UK) and arrived yesterday. Just in time for this week's theme in Postcards for the Weekend, i. e., Love.

This is a scene of Pride and Prejudice (1813), by the favourite author Jane Austen (My album here). A rather old-fashioned conception of love, for our contemporary standards...
14 comments:

Snow for the New Year 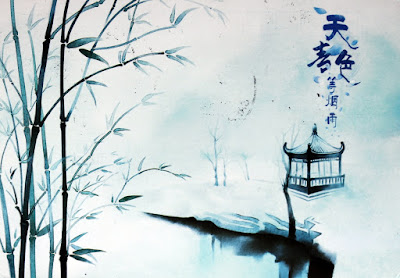 John (the UK) sent me this beautiful postcard with his best wishes for the New (Chinese) Year. I usually do not publish the back, but this is rather interesting... 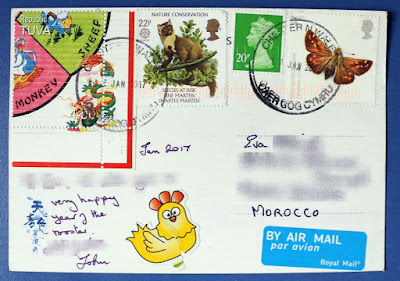 The big stamp on the top left caught my attention. I had ever seen a stamp from Tuva. After reading that there are a lot of illegal stamps supposed to be from Tuva... I do not think this is a real stamp.

But, of course, it was not stuck in order to deceive the postal system, because the due postage is on the postcard. I love it, and the fact it was postmarked... what makes a rarity of it! 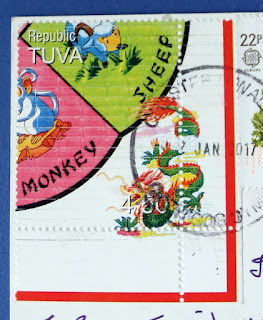 For one of those coincidences, Laura's postcard (the UK), arrived the same day, also full of snow. I love this views. Have you spotted the red mailbox? 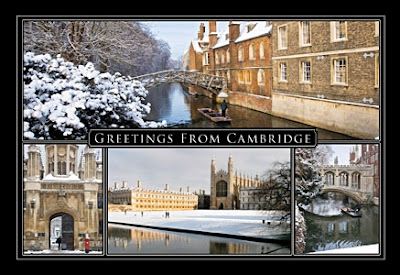 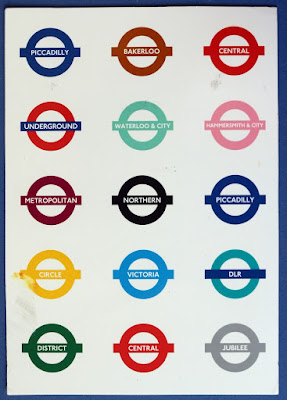 And also from London (the UK), Laura has recently sent this postcard,with the name of some famous lines and/or stations.

I think those above are real stations, unlike the ones on the map I received from her as a Christmas postcard... 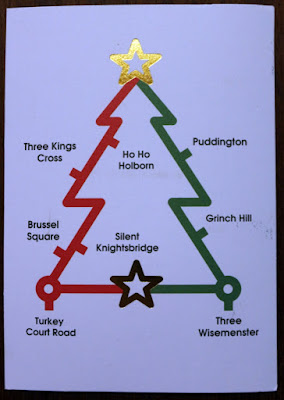 I would be nice to get out of the train at Ho Ho Holborn or Three Wisemenster, wouldn't it?


(More alternative maps with a lot of stations I would like to visit, published some time ago, here.)
4 comments: 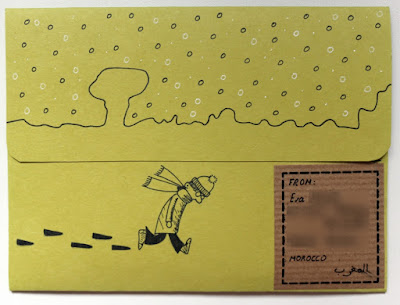 The cold weather continue to inspire my drawings, like the back of this envelope sent to the UK.
4 comments:

I have received a bunch of postcards from London (the UK) throughout the years. I have been there too. But still I enjoy when I receive the not-so-usual views from (or showing) that infinite city... The following have been recently sent by John and Laura.


Which used to be Monday, as the sender wrote on the back. And was especially hard if the football season is rapidly approaching and the clubs should sort out their kits...


(Clotheslines can make a great theme for postcards, who says they can't?)

The presence of all those poppies are explained on the back:


"The Blood Swept Lands and Seas of Red". An extract from the poem by an unknown solier, inspired the artist Paul Cummins MBE and designer Tom Piper MBE to display 888,246 ceramic poppies at the Tower of London. One for every British and Commonwealth Soldier killed in the Great War. "We will remember them".

Wish I Were Here

If you could take a little mental holiday and go to any imaginary place, where would you go? And what would you do while you were there?

Send me a postcard, handmade or otherwise, from an imaginary location. It can be a place from a book or a movie or a piece of music, or some other world you made up. On the other side, write and tell me what you've been doing on your vacation from reality.

I think this project has been discontinued. But you still can have a look at Tara Johnson's Istagram account and laugh with the drawings she makes on letters with wrong addresses...

That is not exactly a postal project. It is just that this Denise McCarty's article surprised me.  I love snails (you knew that), and I have received a few postcards and stamps featuring them. Bu I did not know they were a theme for philatelists!
8 comments:

Happiness on a Postcard

What a Cheerful Letter I Got! 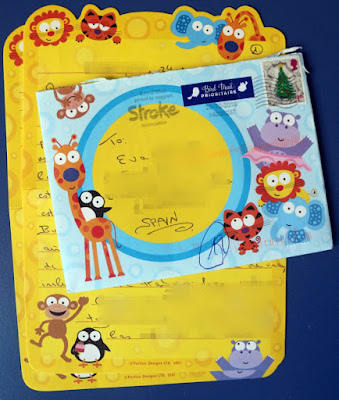 From Laura (the UK).

(I do not understand the blue mark added... by the post office?)
No comments: 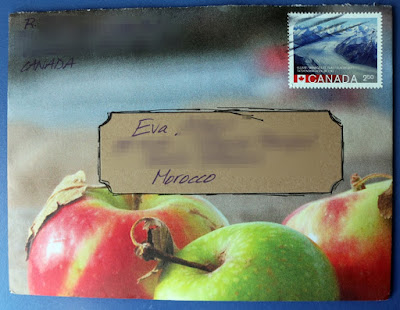 I received a letter inside this handmade envelope back in Autumn, from Rosemary (Canada). But it the back it is stated: "We typically think of autumn as apple season, with wood smoke in the ai and golden leaves rustling under foot. But February is also apple season (...)". 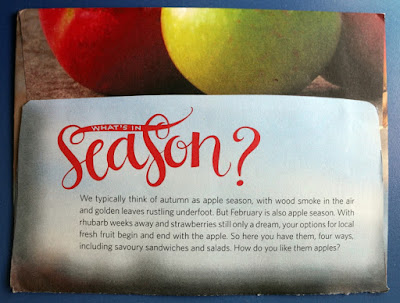