I bet they would have enjoyed a typewriter! 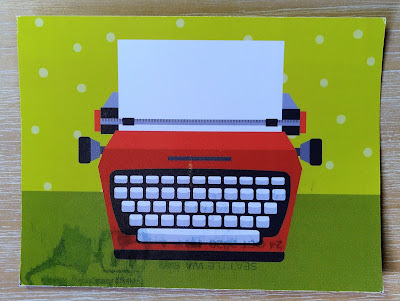 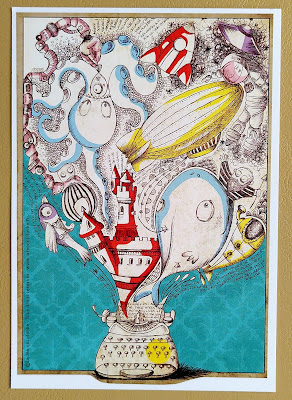 Postcards sent by Laura (the UK), Bryon (the USA) and Fabienne (France).
9 comments:

For today's theme in Sunday Stamps, Children, a stamp recently received on the back of a postcard. 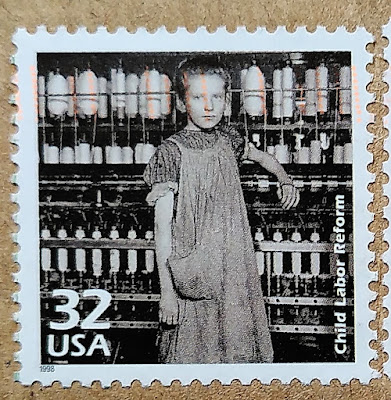 It is a 1998 stamp, belonging to the long series Celebrate the Century, dedicated to the Child Labour Reform.

Who says that beer is not for the cold weather? Well, at least beer postcards can be!

Above, postcard made of beer packaging, sent to Laura (the UK). Below, two useful Postcrossing postcards:
There is still room for postcards made out of wine packaging, like this one sent by Bryon (the USA): 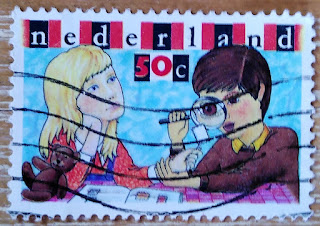 I have loved stamps since I was a child. However, it is only recently that I have started to build my collection . I find a lot of fun on this activity, especially since this is a stay-at-home-a-lot time.

If you plan to do so, there is plenty of useful resources on the Internet. I have listed some of them on this blog page Sites I Love. Yesterday, two readers of the blog suggested me a link: Guide to Stamp Collecting. It is really a great site, very interesting for anyone who wants to get into stamp collecting but don't know where to start.

So... Many thanks, Skyla & Sarah, from the USA! Any other suggestion for this blog will be very welcome. 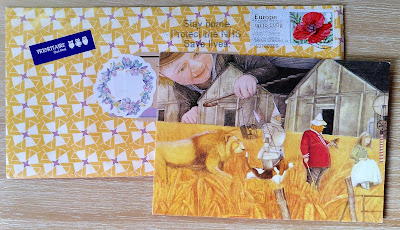 Letter & Postcard sent by Laura (the UK), with matching stamp. It had been a long time since the last Oz-related mail! 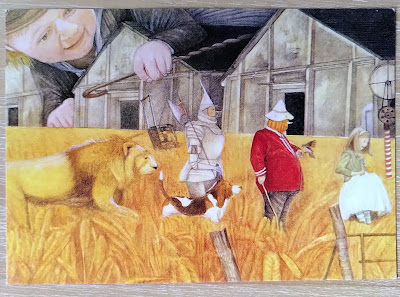 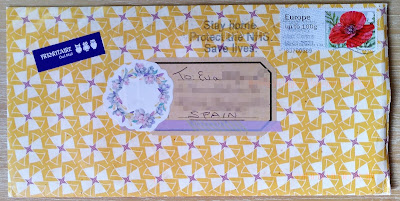 This Postcrossing postcard received form Russia, because of the poppies, makes me think of Oz too... 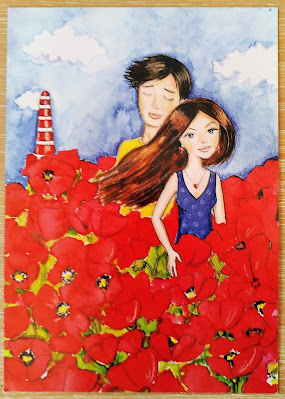 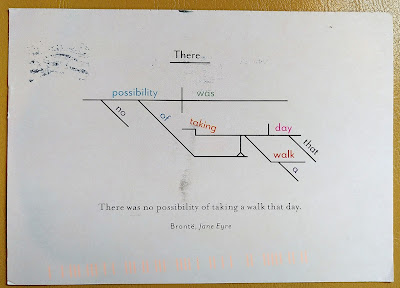 Postcard sent by Bryon (the USA). The Charlotte Brönte quotation (and exercise) included a vintage stamp of Shakespeare on the back. And it arrived along with a letter from the UK, bearing a stamp of the same writer. What a coincidence! 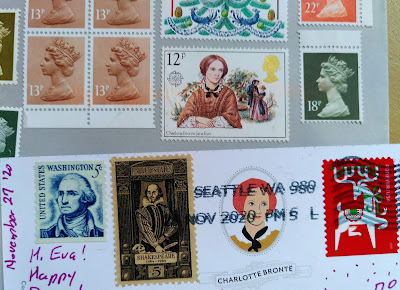 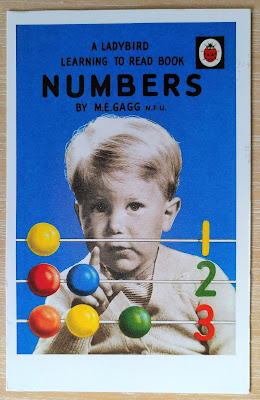 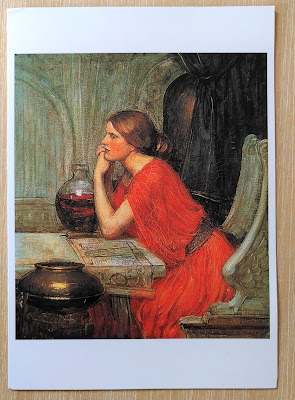 Postcards sent by Laura (the UK).
I got this postcard through the Postcrossing site in December. It bore an ID from Macau, but the stamps were from China, not Macau.
2 comments: 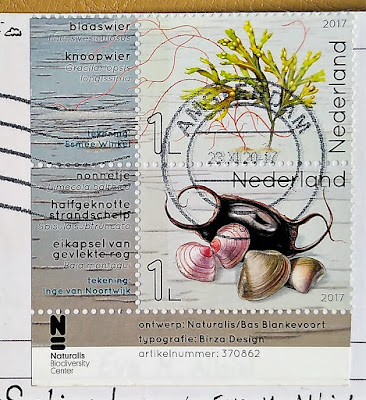 Dutch stamps issued in 2017, featuring marine creatures that are not so usual to see on stamps:

And another stamp recently received. At first sight I thought it belonged to the same series, but this one was issued in 2003, and features a common shore crab (Carcinus maenas). 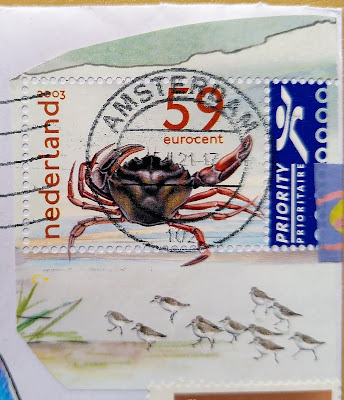 To dive a bit more into the deep blue sea, go to Sunday Stamps. 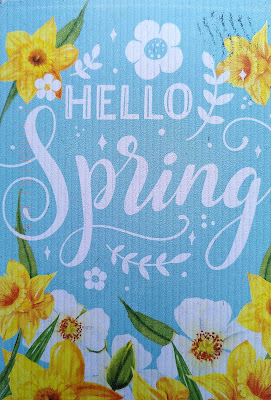 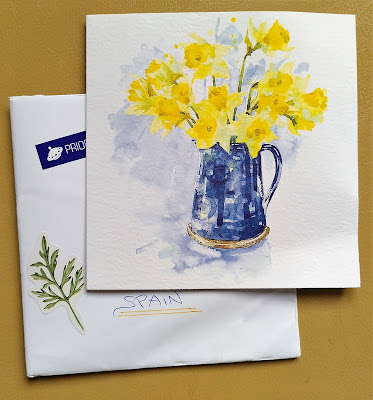 Postcards sent by Bryon (the USA) and Laura (the UK). 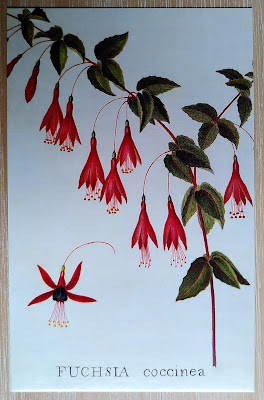 I Would Not Mind to Live a Spring First! 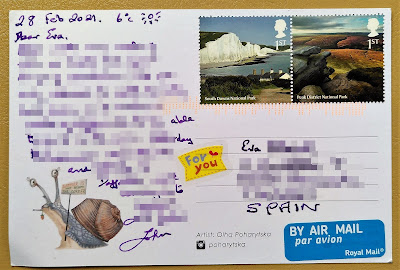 Postcard sent by John (the UK).
No comments: 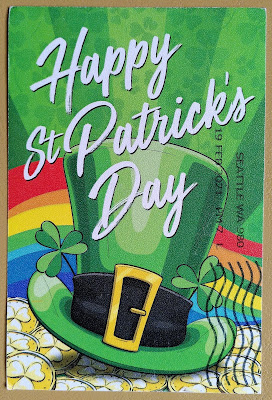 Postcard sent by Bryon (USA), with some matching stamps on the back. 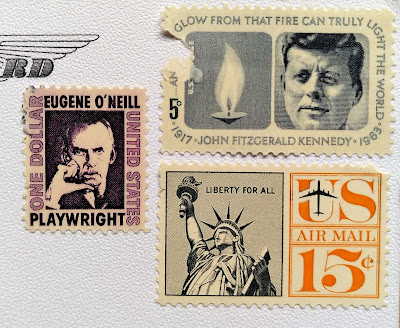 Update: A St. Patrick's postcard received on the due day! (From Laura, the UK). 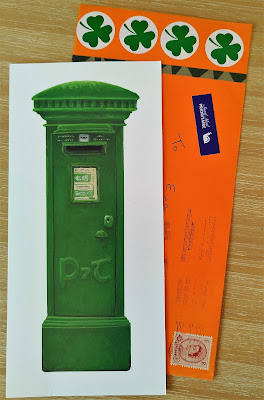 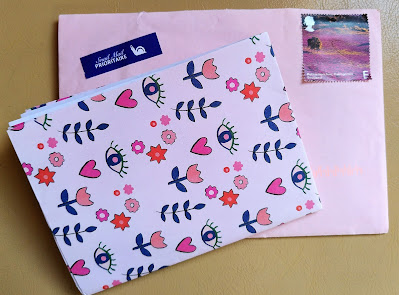 Letter sent by Laura (the UK). 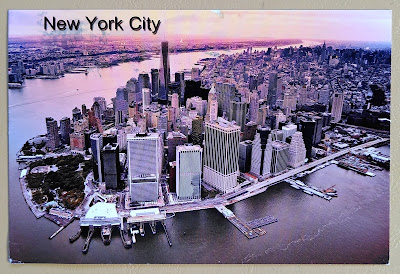 Postcard sent by Vladimir (the USA).
No comments:

The Annaberger Kät is a folk festival that takes place annually for 14 days after Pentecost in the town of Annaberg-Buchholz in East Germany. The Kät is known well outside the region and is one of the oldest folk festivals in Germany, having begun in 1520. This stamp was issued last year to commemorate its 500th anniversary.

These stamps are a Croatia-China joint issue from 2007, to commemorate the 15th anniversary of the establishment of diplomatic relations between the two countries. On the left, you can see a stone with the word China carved in the Glagolitic script; on the right, a papyrus with the word Croatia (Hrvatska) written in the Chinese script.
These stamps belong to a series featuring the Spanish provinces. I had already shown some of them (here, here...). If you know a bit of Spain, maybe you can recognise some of the typical things depicted. Or maybe not, becacuse the stamps are far too small for so many details!

It is hard to believe it has been more than 12 years since I joined Postcrossing. Among other reasons, I thought I could practice my English (and other languages) and get some lighthouses postcards for my collection.

Now, Postcrossing is much more than that. But I am still happy to receive lighthouses postcards & stamps from time to time! 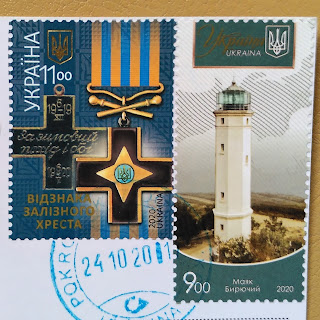