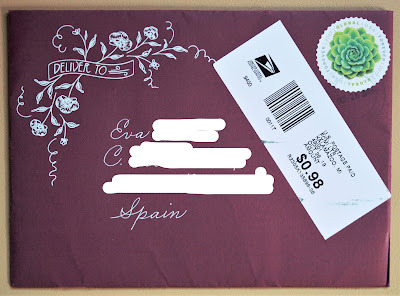 David from Posted sent me this calligraphy-themed letter. The postal service considered they had to add something to the envelope... 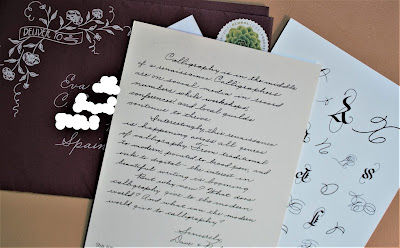 The Museum of the Railroad History at Alexandrov railway station invites you to take part in the mail art project Train №1 dedicated to the 150th anniversary of the first passenger-train arrival on the 1st of January 1870.

The idea: creation of the work of authorship (postcard) which should be sent to the project address via post.

Style of execution: free (drawing, appliqué, collage). It is desirable to send the works without envelopes.

Encouragement for participation in the project is not provided. All works will become a part of the exhibition of the Museum.

Deadline of works receiving is 31 December 2019.

Works can be sent to: 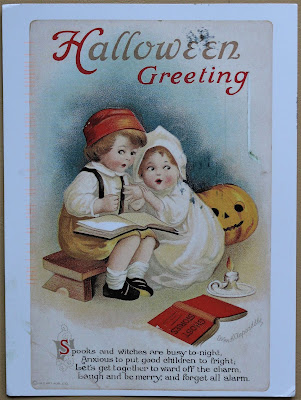 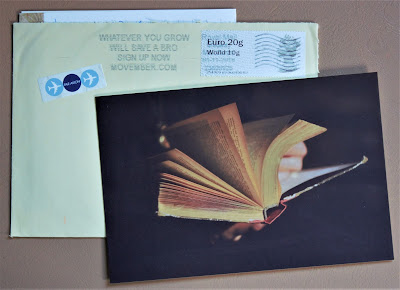 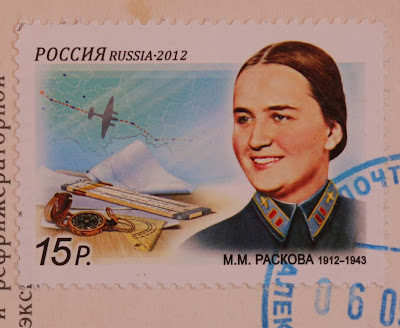 Marina Raskova (1912 – 1943) was a Soviet pilot and navigator. She was the first woman to become a navigator in the Soviet Air Force in 1933. She later became one of over 800,000 women in the military service, founding three female air regiments.

The stamp above was issued on21 March 2012, in honour of her 100th birth anniversary. It arrived on the back of this postcard send by Eduard (Russia). showing the SS Marina Raskova (a former American ship, renamed in June 1943). The postcard shows a non-American ship sunk by a German submarine in 1944. It was a transport refrigerator built for the USSR in Poland in 1971. Incidentally, in 1964 another ship named Marina Raskova (a passenger river ship) was built for the USSR in Hungary. (Thanks, Eduard!) 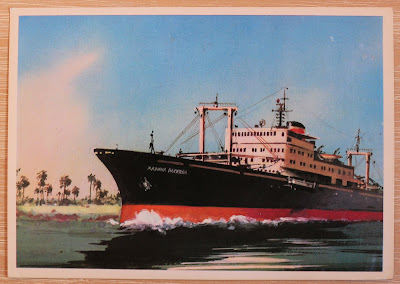 The same day arrived this postcard from Bryon (the USA). It seems they are looking at the SS Marina Raskova from the desk! 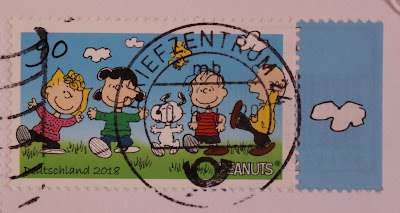 When I read today's theme on Sunday Stamps, i.e. Children, this one, recently received, is the first that came to my mind.

I guess that the Peanuts gang doesn't need introduction... The stamp was issued in Germany in 2018. I had received the other stamp on the set as well. 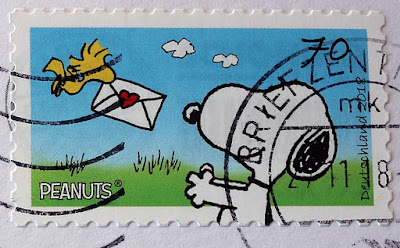 
I hadn't heard about Movember...
4 comments:

A new menu-letter sent by Bryon (the USA).

My colouring pencils are working a lot lately... 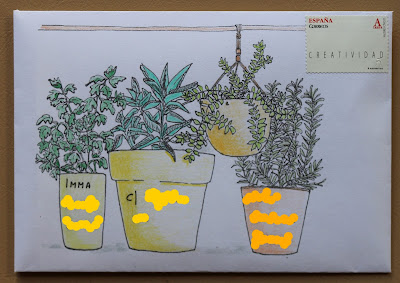 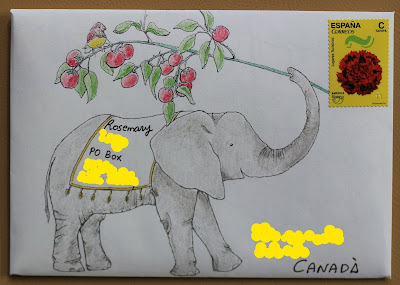 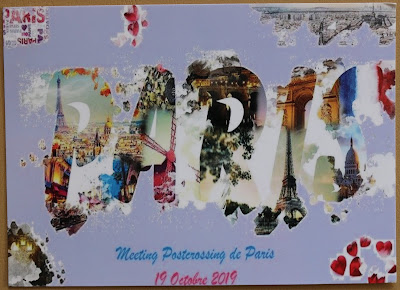 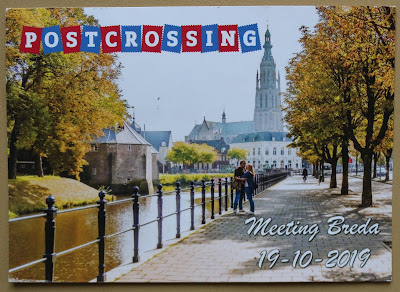 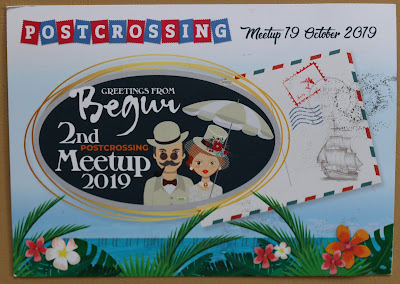 I don't know why so many people chose the 19th October to hold Postcrossing Meetups, but I received no less than three postcards from three different places:
2 comments:

Postcards sent by Bryon and Rosemary (Canada) and Laura (the UK).
2 comments: 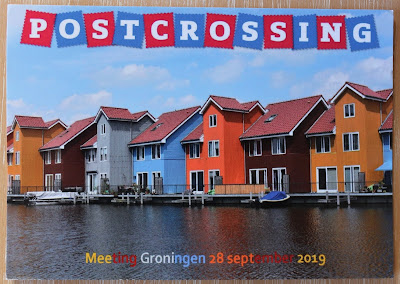 This postcard is from a Postcrossing Meeting held in Groningen on 28 September. I thought I could add these colourful houses to the Houses in the Mail project... 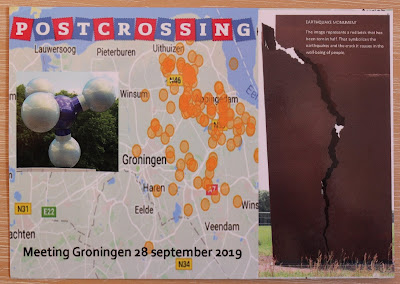 Another postcard from the same meeting. The orange spots on the map show the earthquake areas, due to gas extraction from the Groningen gas fields (more information). On the right, the Earthquake Monument.

The stamps with the flag of the province were designed for the meeting as well: 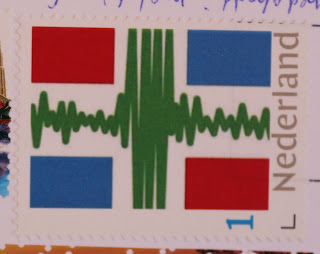 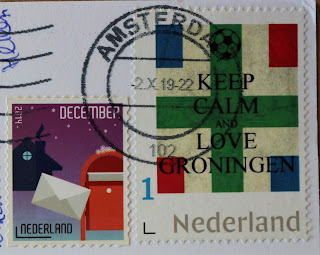 How much information can the front of a postcard contain?


And... how can people be so organised when designing cards?

It Is Raining Letters 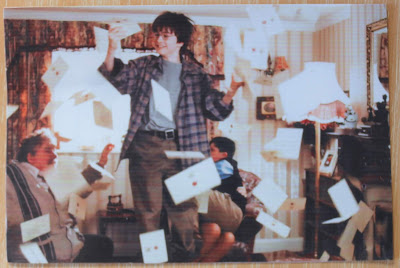 Postcard sent by John (the UK). It features a scene on one (the first?) Harry Potter's film. Probably the favourite scene of snail mail lovers, isn't it?
3 comments: 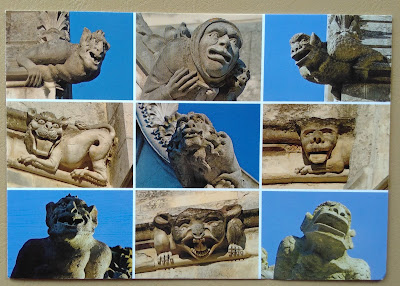 
I don't know why, but gargoyles and grotesques always attract my attention...

For today's theme on Sunday Stamps, Military/Remembrance, I bring three very different stamps related to the World War I. 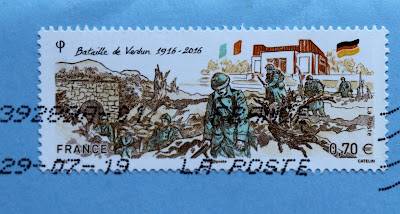 A stamp issued on 29 May 2016 in France to commemorate the 100th Anniversary of the battle of Verdun. On this stamp you can see: soldiers on the battlefield (left), the liberation of Douaumont Fort, (on the right), the Verdun Memorial and the French and German flags. 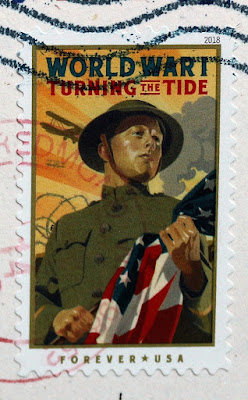 This stamp was issued by the USPS on 27 July 2018. It honours the Americans who, from home and abroad, participated in Worl War I. 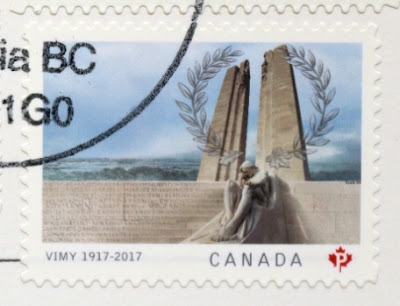 A Canadian stamp issued on 8 April 2017, to commemorate the the 100th Anniversary of the Battle of Vimy Ridge. It is a joint issue with France. More information here, and the whole sheet below. 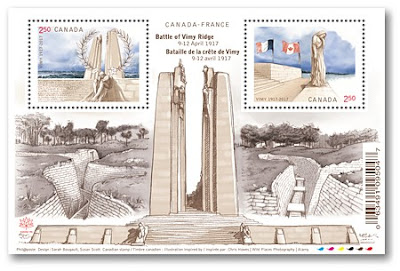 Some Maps in the Mailbox 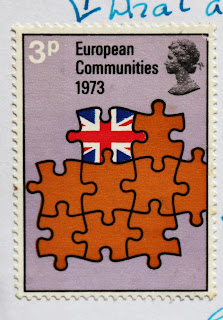 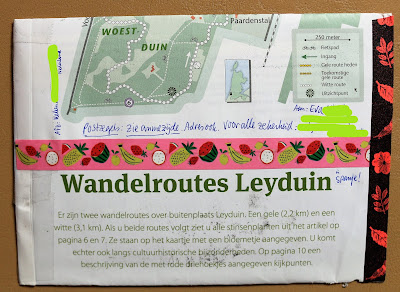 Sent by John (the UK) 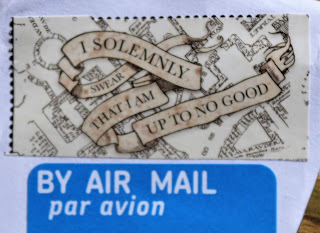 More of Naomi's envelopes which I coloured with colour pencils. 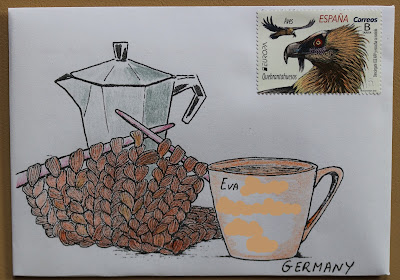 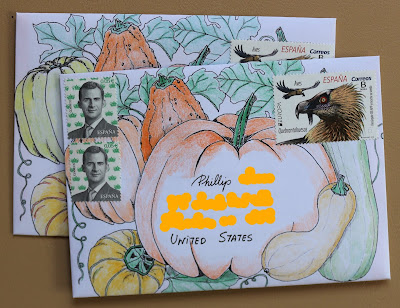 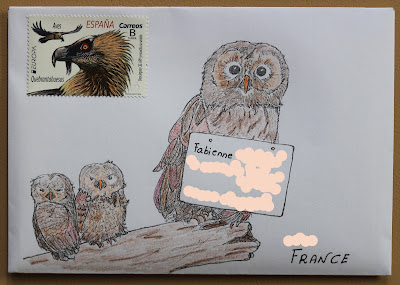