Today is not a quotation but a question... Could anybody (English native speaker) explain me what is the difference between mail box, post box and letter box? How do you use these words? Is there a difference between British and American English?

I'm not the only English learner who has problems with them, and I found contradictory explanations in different dictionaries, so I'm more confused after searching...

Thank you in advance!
7 comments: 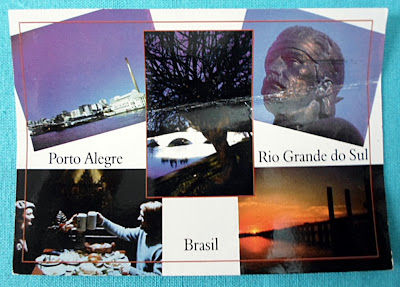 Beautiful postcard showing some pics of Porto Alegre. I have always loved the name of this city! The postcard took 35 days to arrive, and it was slightly damaged in way, as you can see...
No comments:

The Dutch post issued "postsets" (three postcards with three matched stamps per set) in order to commemorate this special trip. Heleen have sent some of them to me... so I have learnt a lot about Dutch geography and culture!

PS I also discovered that Donald's nephews (Huey, Dewy and Louie) are called in Dutch Kwik, Kwek and Kwak. This sound to me like more suitable names for three ducks! I have never read these comics in my language. In Spain the names are Jorgito, Juanito and Jaimito (rather unpronounceable!). But they have different names in other countries. And in yours? 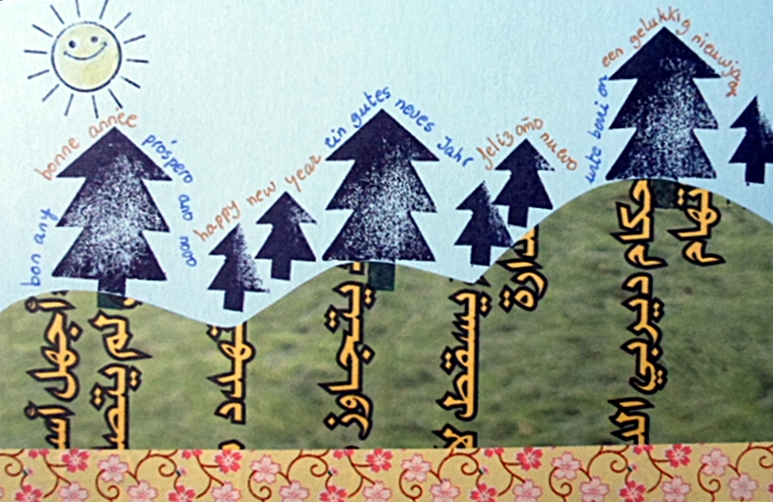 Collage (front and back) made of press cuttings, washi tape and rubber stamps.

I wish you Happy Christmas Day if you celebrate this feast!
2 comments: 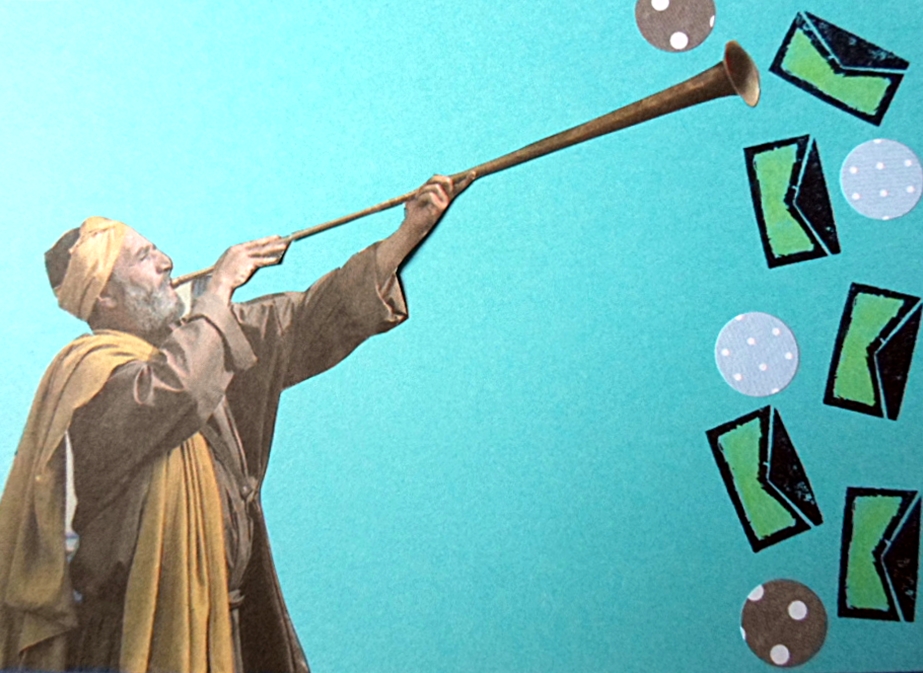 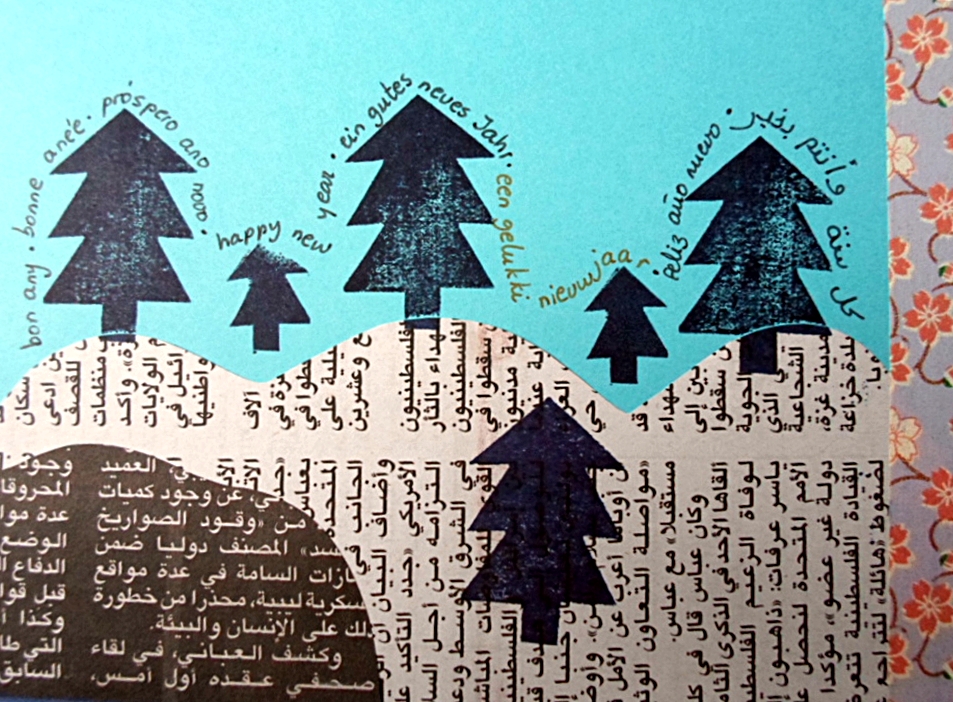 Sent to Heleen (the Netherlands).

Collage (front and back) made of press cuttings, washi tape and rubber stamps I carved. All hand made!
Also published here.

Happy Christmas to the readers who celebrate this feast!
No comments: 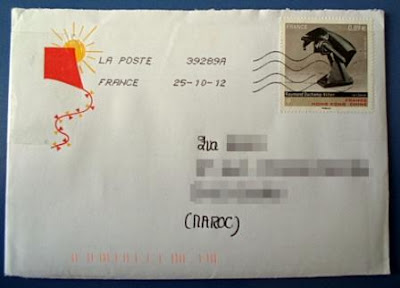 A summer letter when the winter is starting!
No comments: 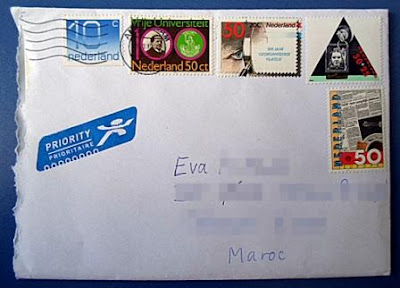 Sent by Heleen (The Netherlands).
No comments: 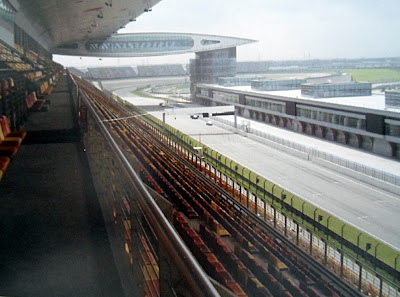 You can see in the postcard the Shangai International F1 Circuit. I was surprised to receive it because I am not into F1 (not into any sport, I am afraid). So I never expect to receive a postcard about sports.

But as usual, when the sender takes the time to write something interesting on the back, the postcard becomes attractive. Now the postcard is among my favourites!

I like this side of Postcrossing: we learn a lot about unexpected things, people and places! Also about ourselves.
No comments: 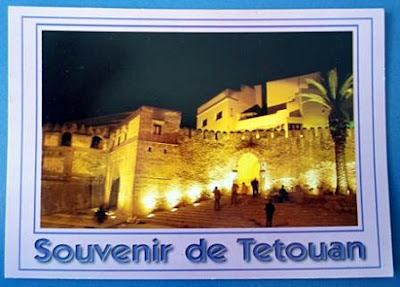 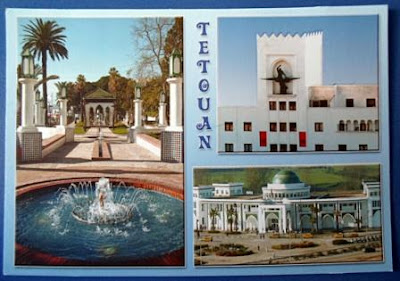 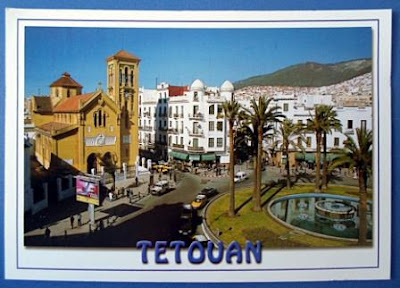 When you move from a place to another, you feel like showing your new city to your friends and possibly your pen friends. But it is truly disappointing when you cannot buy nice postcards... Tetouan is not a small city (more than 300,000 inhabitants!), but it seems impossible to find more than these postcards. Maybe five or six different designs, not more. All look very old-fashioned and faded, and do not show the best parts in the city. Definitely, I think these postcards do not do Tetouan justice. It is much more than that!

What do you think about these postcards?
8 comments: 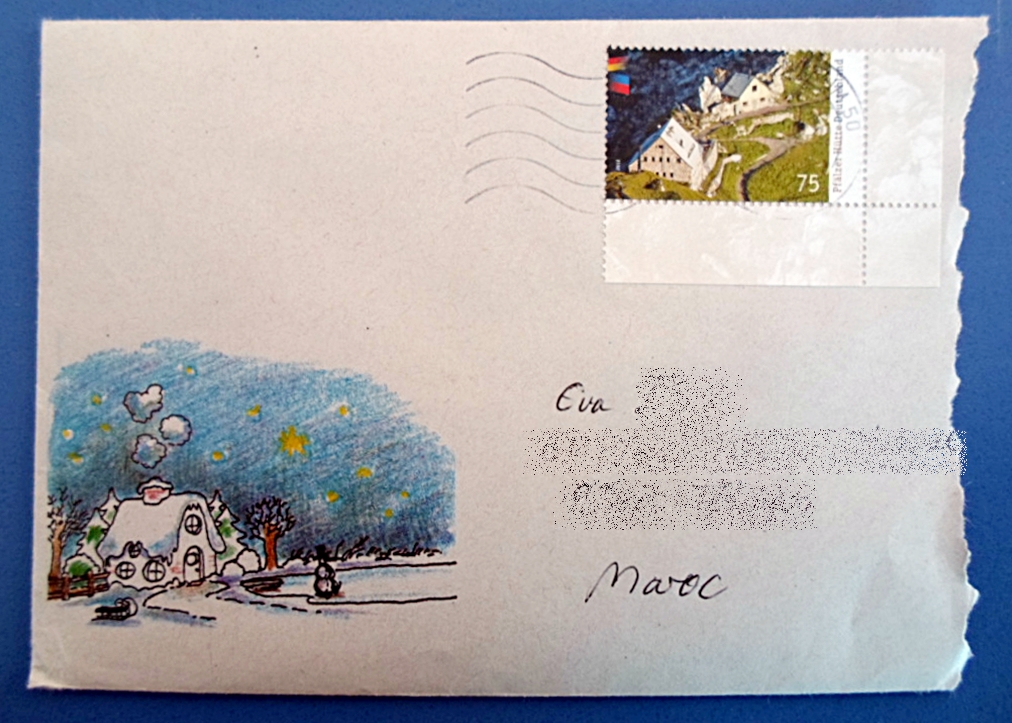 I know it is not, but it seems that the house in the stamp could be the same one as the cosy house drawn on the envelope (and on the writing paper inside).
4 comments: 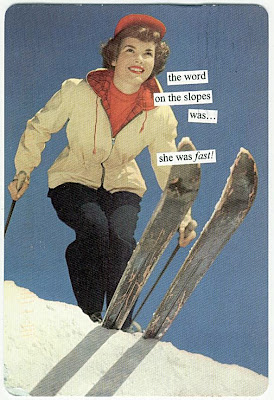 Sent by Marlene (the United States).
Postcard designed by Anne Taintor (here you can read more about her).

I opened this album when I receive this postcard form Marlene. I added two postcards previously sent by Laura (the UK) by Ephemera. I named it retro women, but maybe there is a better name in English to refer to this 50s & 60s retro style... (Please, tell me!). 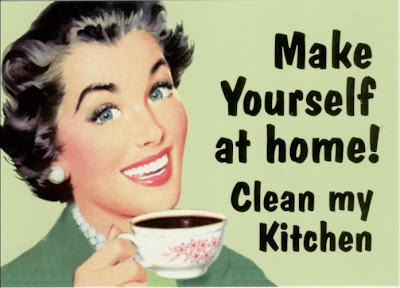 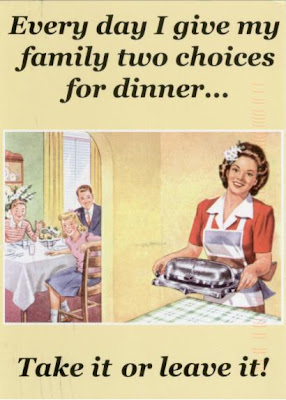 
P.S. I Love You
The Beatles 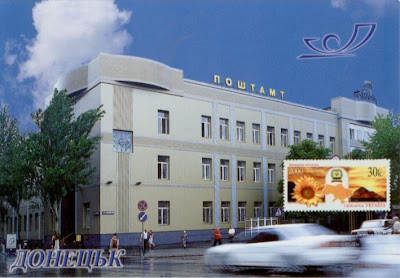 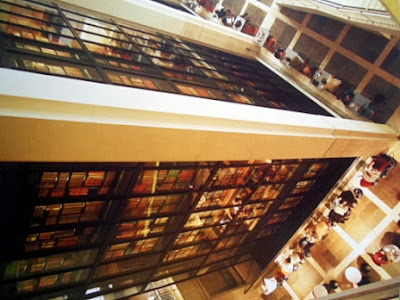 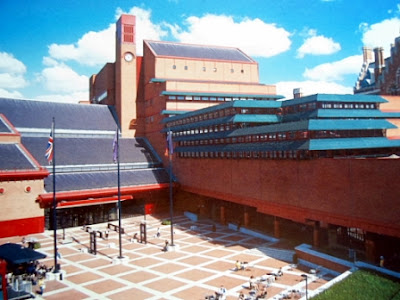 Sent by Laura (the UK).
Two postcards (inside and outside) from the British Library in London (the UK): a view of the King's Library from above and the Piazza.

I like the colours in the second postcard. And... how I would like to take a coffee in that café after visiting the library!
2 comments:

Archived in INcoming MAIL, inside & outside, postcards, UK 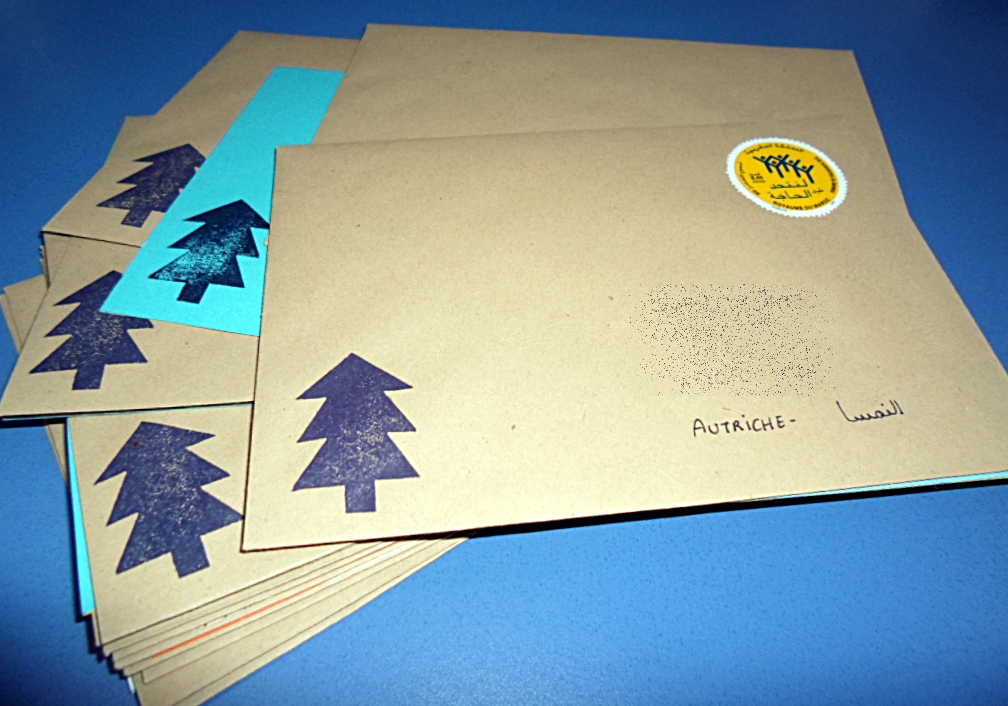 Christmas mail is on its way!

Sent to Austria, Belgium, Canada, Denmark, France, Germany, PC, Taiwan, the Netherlands, the UK... Did I forget any destination?
4 comments: 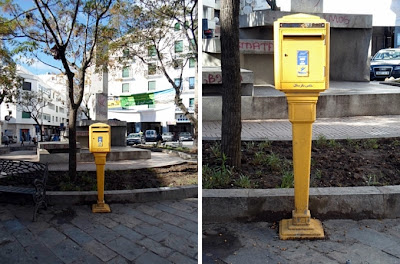 This is the mail box where I usually post my letters and postcards. Isn't it smart and graceful?
4 comments:

Send Me Your Mirrors 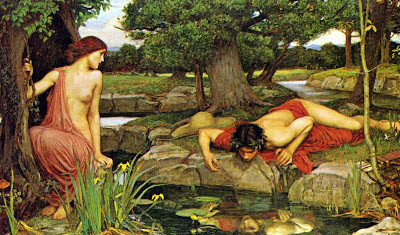 Send me your mirrors!, by Eutrapèlia, is not exactly a mail project. She started to collect mirrors in the form of literature (in all languages) because an academic paper. She has amassed quite a collection already! In fact, she has published literary quotations and poems by a lot of different authors, but also pictures, paintings, songs, films... and, of course, postcards about mirrors.

And she is still waiting for your mirrors!
Please, send your mirrors to: sendmeyourmirrors AT gmail DOT com
1 comment: 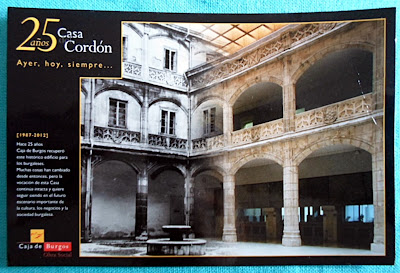 Postcard showing the Casa del Cordón, a 15th century palace recently restored in the city of Burgos (north of Spain). You can see in the postcard the before and the after. I like this idea, as I like postcards showing the inside and the outside of a building, or the same place in daylight and at night, or the same picture big and small...
No comments:

Sent to Heleen (the Netherlands).

Three postcards made from two cheese boxes and one label. I made these postcards to complete this sending. I found these boxes funnier because "La Hollandaise/الهولندية" means 'the Dutch woman'. So the receiver!

I also found a round stamp. I love different shaped stamps, and specially the round ones: 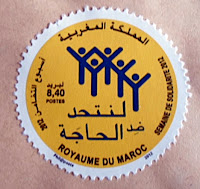 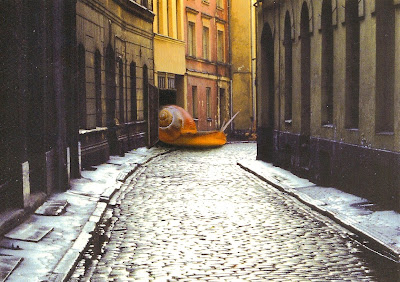 Sent by Heleen (the Netherlands).

Altstadt, by Sigrid Reiss. It seems a photo, but it is an amazing painting.
Sometimes I feel like sharing just a beautiful postcard, a beautiful image I found in my mail box. I love snails. Besides this, they fits in with this moment of my life when managing things take a lot of time. 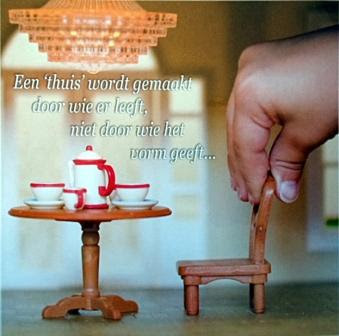 Sent by Heleen (The Netherlands).

It says: "A 'home'is made by the one who lives there, not by the one who designs it". It is a difference between the Dutch word huis ('house') and the word thuis ('home'). I just love the postcard. It is the right time to remind me this saying: when we are trying to turn this house into a home!
1 comment: 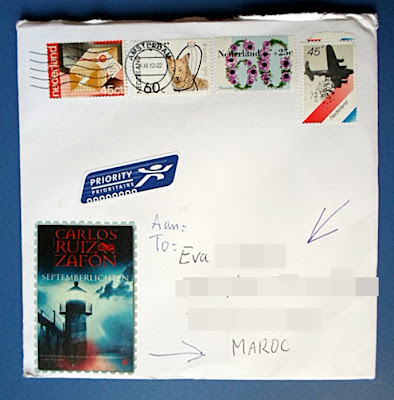 Sent by Heleen (the Netherlands).

This letter spent a lot of time to reach my mail box. It was not a surprise: mail works differently in Morocco, you know. But maybe there is an extra reason. The sender tell us in her blog: "(...) to my surprise the Dutch post first had watched on the (stamp-free!) back side of the envelope and delivered it initially... to me!.. I put it in the letterbox again, and hope it now is on its way to you!". For that reason she added the arrows, I suppose.

Finally it arrived with an amazing picture of La Vieille Lighthouse inside. It is not an unknown shore. I have seen this famous lighthouse in many pictures. And... I have also seen the real one (from the coast). It was during a trip in Brittany (France) in 2003. It was a very nice trip from lighthouse to lighthouse...

And the artistamp is about a novel by the Spanish writer Carlos Ruiz Zafón.


NB I adore the fact that I can include five countries in the same post: the Netherlands, Morocco, France, Spain and Australia!
3 comments: