Letters sent to Phillip (the USA).

These stamps were issued on 5 May 2022. They honour the Mississippi river, frequently named "the backbone" of the country, with ten  stamps. Mighty Mississippi stamps feature photographs that each represent a different state along the river’s 2,340-mile length that stretches from remote Lake Itasca in northern Minnesota to the Gulf of Mexico.

Thanks to Bryon and Phillip!
No comments:

It Is Raining Cats and Dogs 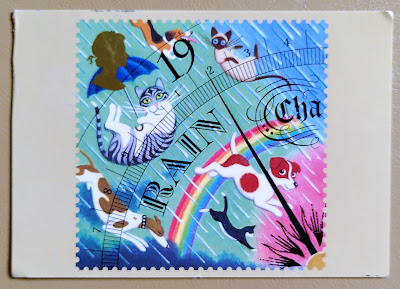 Actually, it was yesterday, not today. But I love that idiom, and I have never the chance to use it in real life…
Postcard sent by Bryon (the USA).
4 comments:

Sundays Stamps goes today for Swimmers. I think I found some among my received stamps...

Swimming in the sea 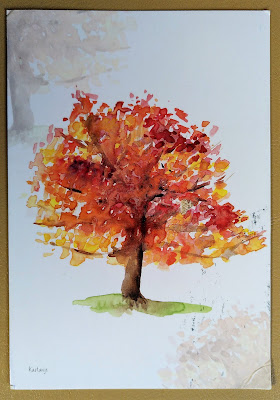 Postcard of a chestnut sent by Heleen (the Netherlands). 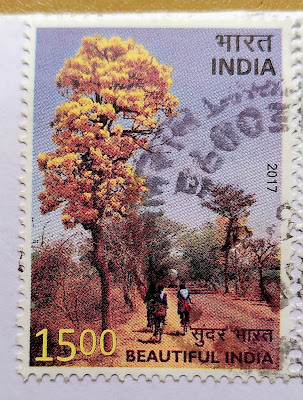 Stamp issued by India Post on 15 August 2017, featuring one of the winners of the Beautiful India Nationwide Photography Competition. I do not know when the picture was taken, but it seems Autumn to me. 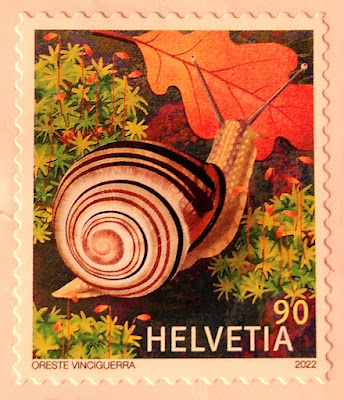 This stamp belong to the series Animals in their habitats, issued by Swiss Post in March 2022. I like the description on the web:

The first depicts the brown-lipped snail, which carries its home around on its back and can be seen crawling at a leisurely pace over mossy terrain. It adorns the B Mail face value and is also a tongue-in-cheek reference to snail mail.

It was a present from Heleen and arrived inside this envelope.
No comments: 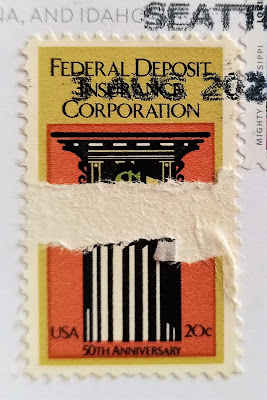 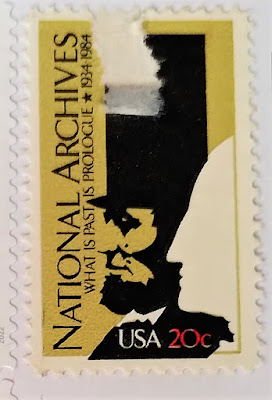 
These two stamps belong to the series Village Churches. See here the rest of the stamps, if interested.


This is a post for Sunday Stamps. Today's theme is Places of Worship.
6 comments: 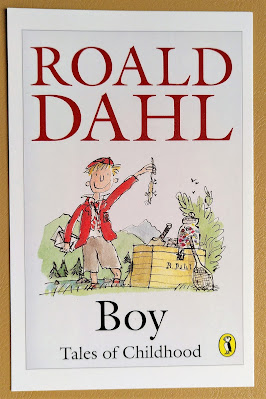 Postcard sent by John (the UK).
No comments:

On the back of a postcard sent by Bryon (the USA).

I may have a lot of black stamps, but these two came immediately to my mind when I read the theme of today's Sunday Stamps: The black colour.

Sheikh Zayed bin Sultan Al Nahyan (1918-2004) was an Emirati politician, statesman, and philanthropist who served as the first president of the United Arab Emirates (UAE) from 1971 until his death in 2004. He is credited as the founding father and the principal driving force behind the formation of the UAE, uniting seven emirates.

2018 was declared the Year of Zayed to mark 100 years since his birth.

Among the works of art that participated in the design competition organized in the spring 2014, six were selected to be featured in the stamps issued on January to celebrate the 150th anniversary of the Artists' Association of Finland.

This stamp features one of the selected works: Piste ('Dot') by Mika Natri.

A Couple of Stamps 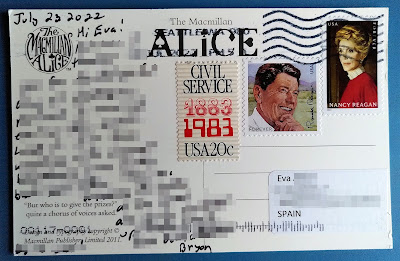 Back of a postcard sent by Bryon (the USA). 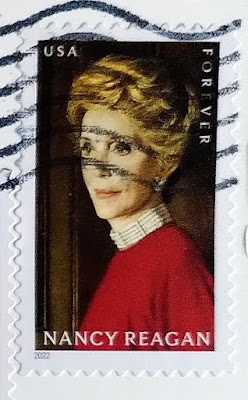 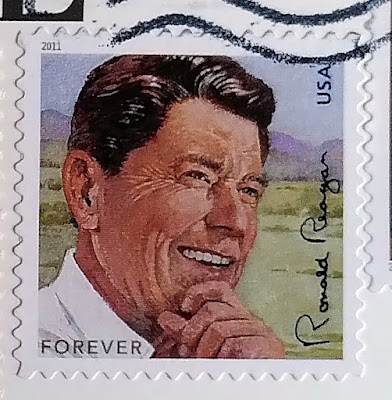 My friends are following the advice... 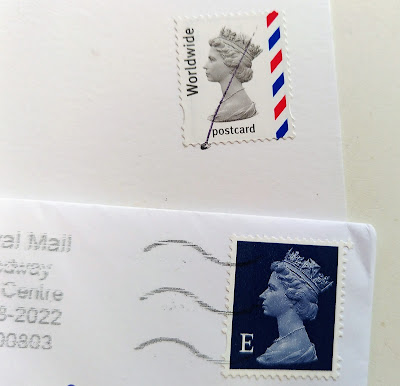 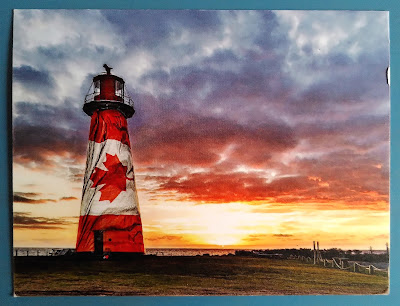 Point Prim Lighthouse in Prince Edward Island (Canada). In case you are wondering, the lighthouse is white, and the flag is a projection.
It was a swap. I sent to Lynn a postcard with a lighthouse from my country.
Very satisfying... except for the pen cancellation on the stamps!

Some people Having fun in Fairs and Festivals for today's Sunday Stamps...

Sorry for the blurry picture! I am not able to find the real stamps right now. I found a better picture of the stamps here:

The complete set, taken from here: 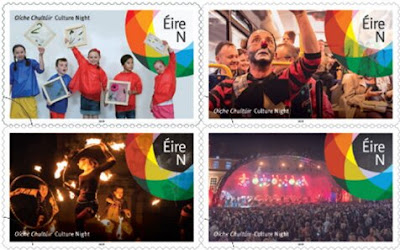 I have got only this one, but they were also four stamps in the series:

You have still a week (until 9 September) to cast your vote on the competition that chooses the most beautiful EUROPA stamp of the year. The theme this year is Stories & Myths.
You can see the full gallery on this page. Below, the EUROPA stamps I have got this year: 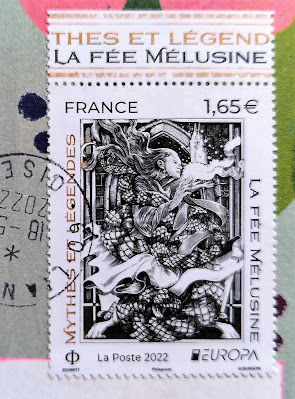 France. Mélusine (Melusina) is a legendary creature depicted as a mermaid, a reptile from the hips down, or a dragon. Coming from chivalrous stories and medieval tales, she becomes a river nymph, living in a water hole, a fairy nestled at the bottom of a cave, or even living in the hollow of a moor. 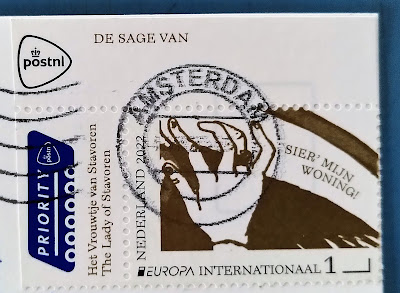 The Netherlands. Vrouwtje van Stavoren (Lady of Stavoren) is a legend about how pride comes before a fall. The story is about a rich merchant's wife. In a fit of rage, she throws grain overboard in the harbour of Stavoren. When bystanders are outraged, the woman throws a precious ring into the waves and says she will only regret it when the sea returns her ring. And the sea does just that, as she finds the ring in the belly of a fish. From then on, things start to go downhill: the woman loses all her money, the harbour silts up and Stavoren’s prosperity becomes a thing of the past. 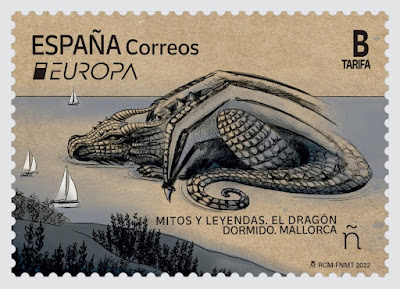 Spain*. In the southwest of Mallorca lies the legendary island of Dragonera, a hideout for pirates and smugglers between the 14th and 16th centuries. It takes its name from its silhouette resembling that of a sleeping dragon, a legendary animal watching over the coast and the ships approaching it. According to the myth, there are many small dragons or guardians of the area, the Lilford's wall lizards (Podarcis lilfordi) , an endemic species of the island which can be specially seen during the warmer months. The legend of the dragon speaks of this mythological animal and all kinds of reptiles protecting Mallorca from unwanted invaders.
-----
*I have not got, but sent, this one!
4 comments: 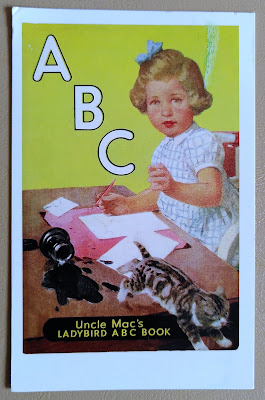 Postcard sent by Laura (the UK).