The theme for this weekend in Postcards for the Weekend is: from a country you have visited or a favorite place in your country that you have visited. Unable top decide, I am sharing some of the latest postcards I have received. They depict some spots of the the Spanish city of Seville, and were sent by Laura (Spain & the UK). I have been there twice, and I would not mind to be back! Santa Cruz was the former judería (Jewish quarter) of the medieval city. It is the location of many of Seville's oldest churches and is home to the Cathedra. 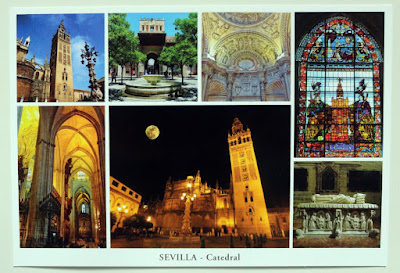 The Catedral de Santa María de la Sede ('Cathedral of Saint Mary of the See'), is a Roman Catholic cathedral. It claims to be the largest cathedral and the third-largest church in the world. It was registered in 1987 by UNESCO as a World Heritage Site, along with the Alcázar palace complex and the General Archive of the Indies.

Its bell tower is named Giralda. It was a former minaret of the mosque that stood on the site, and was built to resemble the minaret of the Koutoubia Mosque in Marrakech, Morocco.

The cathedral is also the burial site of Christopher Columbus.


The Alcázar of Seville is a royal palace, originally developed by Moorish Muslim kings. The postcard above shows the main entrance. Below, you can get a glimpse of the luxurious interior. 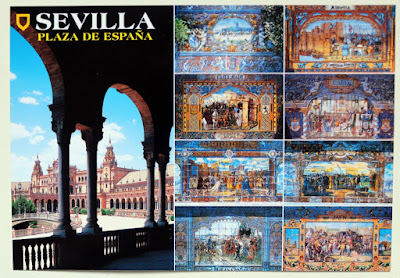 The Plaza de España ('Spain Square') was built in 1928 for the Ibero-American Exposition of 1929. It is a landmark example of the Regionalism Architecture. The fifty provinces of Spain are represented. On the postcard, you can see the tiled alcoves of the eight Andalusian provinces. 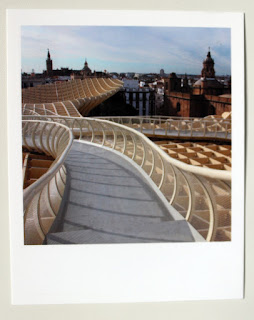 Metropol Parasol is a wooden structure located at La Encarnación square, in the old quarter of the city. It was designed by the German architect Jürgen Mayer and completed in April 2011. It claims to be the largest wooden structure in the world. Its appearance, location, delays and cost overruns in construction resulted in much public controversy. The building is popularly known as Las Setas de la Encarnación ('Incarnation's mushrooms').

Archived in INcoming MAIL, inside & outside, places I've been to, postcards, Postcards for the weekend, Spain, UK, UNESCO WH