Today's theme of Maria's link Postcards for the Weekend is Aerial Views, and I think this postcard sent by Ravindra (Sri Lanka) fits in. 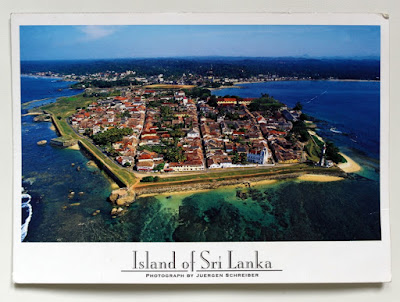 It shows Galle Fort, built first in 1588 by the Portuguese, then then fortified by the Dutch from 1649 onwards. It is a historical, archaeological and architectural heritage monument. It has been inscribed as a cultural heritage UNESCO World Heritage Site.

Have you spotted the Galle Lighthouse tower on the postcard?

When I received the postcard above, I remember that Ravindra sent this one some years ago, and I never uploaded it to the blog. It is a better view of Sri Lanka's oldest light station, dated from 1848 (But the current tower is the third one, erected in 1939).