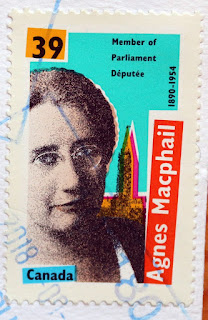 She devoted much of her energy to rural issues and women's rights. She was a major catalyst in the establishment of the Elizabeth Fry Society of Toronto, an organization which aids women in conflict with the law. She was also deeply committed to disarmament, a cause which took her to Geneva in 1929 as Canada's first woman delegate to the League of Nations.

The stamp was issued in 1990, marking the centennial of Agnes Macphail birth. Designed by Eskind Waddell (based on a photograph by P. Hardy), it combines a portrait of Agnes Macphail, in the 1930's, with a colourful background collage of the Parliament Buildings.

The three stamps belong to the series Canadians in Flight, issues on 29 March 2019, that celebrates three individuals and two aircraft that took Canadian aviation to new heights.

(NB Have you noticed the postmark? It is from Saint-Louis-du-Ha!Ha!)

----------
For the current round of Sunday Stamps A-Z I am showing stamps dedicated to women. You can see here all the Women on Stamps featured on this blog.