In July, Royal Mail issued a set of eight stamps which celebrates the pride of "often seemingly unusual customs that are carried out throughout the UK". Receiving some of them has allowed me to learn about those customs. Curious, indeed! 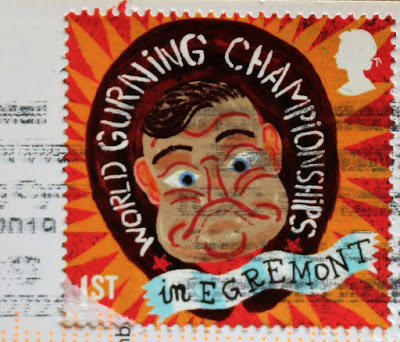 Background: Every year, The World Gurning Championship is held at Egremont Crab Fair.

The competition involves both men and women competing to produce the most grotesque looking facial expressions whilst they are framed in a horse collar.

The Egremont Crab Fair was first established in 1267, making it one of the oldest fairs in the world and also hosts other unusual competitions including Cumberland wrestling, Wheelbarrow Racing and climbing the greasy pole.