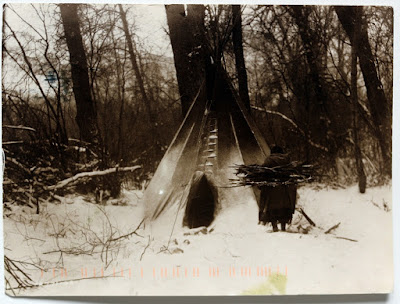 The Crow Nation (also known as Apsáalooke), in historical times lived in the Yellowstone River valley, and now primarily in Montana.

Their traditional housing used to be the tipi, a cone-shaped tent, traditionally made of animal skins upon wooden poles. Historically, the tipi was used by First Nations people of the Plains in the Great Plains and Canadian Prairies of North America, as well as by indigenous peoples of northern Europe and Asia under other names. 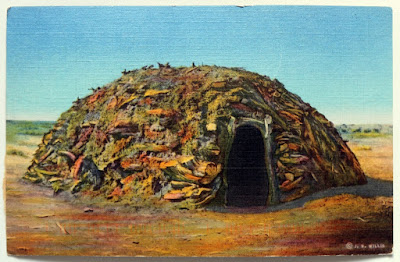 A vintage one, with interesting information on the back:

The Navajo Indian house or home is still built in aboriginal style of sticks and mud with dirt floors. From ancient custom the door always faces the east. During the summer months they move higher into the mountains and built a temporary Hogan.
In case of death of any member of the family, while in the Hogan, they immediately desert it and it is known as a "Chin-dee-Hogan" or haunted house.

Both postcards sent by Bryon (the USA).