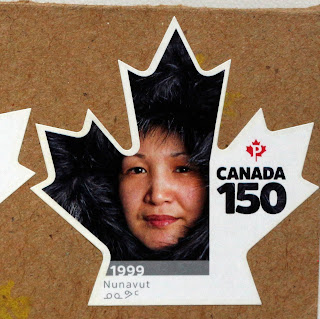 To celebrate the 150th anniversary of the country, Canada Post issued a very special set of leaf-shaped stamps,  dedicated to 10 unforgettable moments and achievements from the last 50 years.

One of the stamps commemorate the creation of the territory of Nunavut on 1 April 1999, after a decades-long struggle of the Inuit people (The whole story here). The stamp features the image of Leah Ejangiaq Kines, photographed by her husband Clare Kines, both of Arctic Bay.

(Update: I have just realised that I had already uploaded these stamps to the blog, along from others from the same set!)

For the new edition of Sunday Stamps-II A to Z, I have decided to show some of the stamps I have got on letters and postcards, related to one topic: women. This is the post for the letter N.