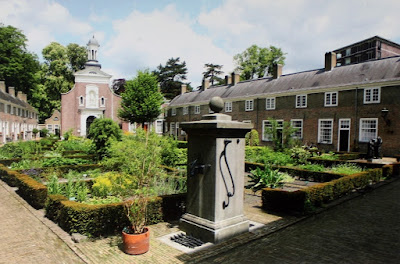 Postcard sent by Heleen (the Netherlands). It shows the Beginhof, in Breda.

A hof or hofjie is (according to the sender and the Wikipedia):


(...) a Dutch word for a courtyard with almshouses around it. They have existed since the Middle Ages. A hofje provided housing for elderly people (mostly women). (...) The U-shape of hofjes was most likely inspired by the (older) begijnenhofjes (groups of small houses inhabited exclusively by religious women).

It seems that some hofjies are still in use, were elder people live together and take care of each other. Speaking on the elders... I added this post to Maria's link party Postcards for the Weekend, for the theme Time.

Archived in INcoming MAIL, Netherlands, postcards, Postcards for the weekend