The Weeping Angel of Amiens

The statue of this cherub is a work of Nicolas Blasset, and it is a part of the the funerary monument of canon Guilain Lucas who died in 1628, in the Amiens Cathedral (France). The angel’s right hand is set on an hourglass symbolizing the brevity of life. As for his left elbow, it rests on the skull of a skeleton, a symbol of death. It is widely known as l'Ange pleurer ('the Weeping Angel') of Amiens. 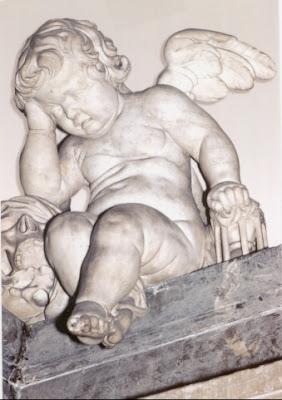 Beginning with the Battle of the Somme and throughout the remainder of World War I, soldiers who survived death started buying memorabilia featuring the Weeping Angel: various items, but postcards in particular. These they sent to family, fiancé(e)s, and friends throughout the Commonwealth, becoming one of the commonest postcards at that time. 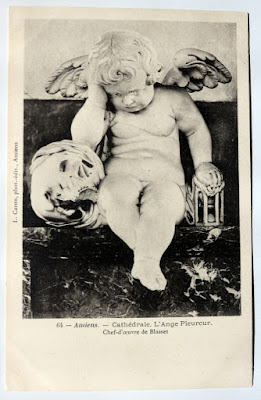 These postcards were sent to me by Catherine and Fabienne (France).