I receive quite a lot of stamps depicting Elizabeth II, queen of the United Kingdom, Canada, Australia, and New Zealand since 6 February 1952, and also of 12 countries that have become independent since her accession. Queen of Stamps, I should add, because she is probably the person who has appeared more time on stamps around the world.

The palette of colours of the traditional Machin stamps amazes me. But I am happy when I receive different stamps. Like the following, issued with the occasion of her Diamond Jubilee:

Or from exotic countries, even those that don't exist any more, like North Borneo:

If you are a queen or an almost-queen (ie, a princess), you are more than likely to appear on a stamp. But, besides living real queens, you can find more original ones: 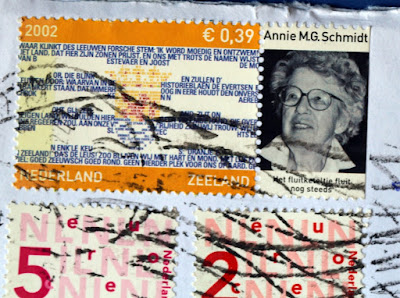 Annie M.G. Schmidt, known by the series Jip and Janneke illustrated by Fiep Westendorp as many of her books, is "the queen of Dutch children's literature" (Wikipedia dixit). 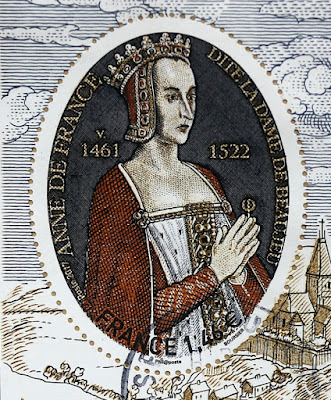 Anna de France (aka Anne de Beaujeu, 1461-1522) was a French princess and regent, the eldest daughter of Louis XI. Anne was the sister of Charles VIII, for whom she acted as regent during his minority from 1483 until 1491. This oval stamp was issued on 30 June 2017. See here the beautiful sheet, dedicated to the Treaty of Picquigny.

For the new edition of Sunday Stamps-II A to Z, I have decided to show some of the stamps I have got on letters and postcards, related to one topic: women. This is the post for the letter Q.